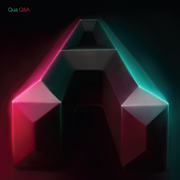 There are times while listening to Qua’s third album Q&A that you think you might be arriving at that same riotous intersection of aesthetics and dynamics where, say, Daft Punk’s “Robot Rock” brought you. That you might be experiencing an album on which, from one moment and one song to the next, you know the artist is testing the limits of both his software and creativity, cramming every muscular exercise corpuscle-tight with ideas. It doesn’t coalesce with the French duo’s efficiency, but then that hardly seems the point. This is less a set to dance to as to be listened to while the television and radio are also blaring, while the windows are open, while having three conversations at the same time. Not so much heteroglossic and heteroglossy; style overload.

Q&A is already a couple of years old, having been released in Australia back in those dark years of 2008, but, in a gesture that proves that releasing something physically on the other side of the planet sometimes gives new heft to it – recontextualizes it in interesting and revitalizing ways – Mush is giving the record the local treatment. The album sounds polar compared to the artist’s earlier work, which ranged from vaguely acoustic to ambient; here, it’s hysterical, goggle-eyed, and ecstatic; a panic informed by a four year hiatus, seeming, like Justice and Clark and Pivot and Daft Punk—all of whom this record seems to pay tribute to—to drop to earth from outer space like that monolithic A on the cover. Elsewhere the album hints at the kind of quaintness of contrast employed by Caribou back in his Manitoba days—the flute on “Goodmorning Sun” and the inevitable drum freakout you just know is coming. And, while “Yes Sir, No Sir” acts like a kind of centerpiece of the album because of how it becomes focused just when you start to think Cornal Wilczek’s ADD tendencies are becoming too much, “Circles” remains the most sustaining song here. It seems to adhere closest to the sentimental notion of songs that build and have movement and flow and move linearly from one compartment or section to the next.

What I’ve suggested here is something slapdash and chaotic, which makes it sound lazy, and that’s not the case. Though the songs are purposefully overpacked, they are functioning wholes, too. Each eccentric piece is partnered to another, and Wilczek knows enough to keep the pace steady and engaged, the emphasis on the drums. It’s just that he’s let his melodic dogs loose all over the record, and from the first few moments of “Lapsang Souchong” it’s clear that this music isn’t so much disinterested with restraint as having wholly eliminated it from its toolbox. It telegraphs its intentions all over the damn place.

It might be one of the year’s most fun albums, or might have been back in 2008 at least. If you aren’t the kind of person who keeps a close eye on Australian electronic imports, and so not a person who’s had any chance in hell of having heard this, then it’s worth of a listen. Let’s hope that the two year delay means there’s more coming, and soon.