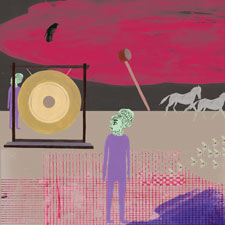 Some are perplexed that Quasi aren’t quite the lodestars their pedigree would suggest. Janet Weiss and Sam Coomes (of Sleater-Kinney and Heat Miser) are two names that command respect, but by all appearances their reputation falls south of, say, the New Pornographers. There may be an answer: with the exception of 1998’s Featuring “Birds”, the band’s charms seemed to run out before their records did. Their last three albums all feature the kinds of great songs that made “Birds” a masterpiece, but they’re also weighted down with genre experiments, overdubs, and skronky experimentation. The results proved great at times, but there are a lot of bands who do the same thing: few can write the songs that Coomes can do so well, grafting onto his elegant, sophisticated pop songs an understated mordant wit to rival Dorothy Parker’s. Combined with Weiss’ prowess and heaps of wooly, left-in-the-garage fuzz, they’re unrivaled when they’re content to hew to their strengths.

American Gong continues the band’s identity crisis in a way. It begins with two heretofore uncharacteristic forays into garage rock, wanders into several guitar epics, tries on an acoustic guitar and the French language, and somewhere in there plops down a typical Quasi number or two. Unlike their three previous albums, though, Coomes shows up with some bullet-proof material. “Little White Horse,” the second and best of the garage songs, crafts a strong hook from Weiss’ tom toms and the pair’s shouts. “Bye Bye Black Bird” starts with a winding, ponderous guitar arpeggio and leads to the kind of fractured, leaking lullaby that Syd Barret would appreciate, especially as it pulls itself from the edge of a noisy freak-out so Coomes can announce he “has no time to drop LSD / but I guess I still got time for DMT.” “Black Dog and Bubbles” simultaneously channels vintage Neil Young and late-period Beatles. “Everything and Nothing at All” is only missing the Rocksichord, a great piece of classic Quasi where its many overdubs enhance the song. Even the overt classic rock rip-off “Rockabilly Party” is catchy.

What a difference some songwriting makes! Credit should also go to their new permanent member, Jicks bassist Joanna Bolme. She plays as if she’s always been there, in one record displaying the same intuition and headspace that Coomes and Weiss have spent years and a failed marriage achieving (surely this has something to do with touring with Weiss in the Jicks for a few years). Now, when the songs extend, they not only feel natural, but sound enormous. The overdubs embellish the ideas in the improvisation instead of attempting to make sense of them. Sadly, adding low end means Weiss’ drumkit doesn’t pop out of the mix as sharply as on other records; but she’s never sang more beautifully, matching Coomes perfectly in their drawn out, practically ametrical singing in “Repulsion”‘s chorus.

Not every song works so well: “Lassez Les Bons Temps Roule” is an idea in search of execution, while “The Jig is Up” is performed only by Coomes, and begs for his band’s touch. But American Gong remains the most satisfying Quasi LP in twelve years, a shaggy, druggy album in the proud Pacific Northwest indie-rock tradition, recalling Featuring “Birds” less than Built to Spill’s immortal There’s Nothing Wrong with Love (1994). The band is mounting a rare major tour to support the effort, and they’re right to defend it on the road. Perhaps inserting “It’s Raining” and “California” into the set can permanently lodge them in their deserved place as one of America’s best bands.