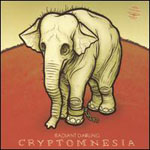 Upon first hearing it, the name Radiant Darling summoned various unwelcome images into my mind. What would a band with this name sound like, I wondered, first imagining a fierce black-lipped punk-goddess. I saw her on a dingy stage, glaring into a crowd of aggressively pierced faces, donning a ripped t-shirt with the words “Radiant My Ass” plastered in hot pink across the front. Then, I thought, no; that’s too counter-culture for 2006. Radiant Darling are likely a foursome of attractive white males from the suburban mid-west. Their pants are too short and they sing Simon & Garfunkel covers and sigh convincingly tortured sighs between numbers. Crowds can’t help but sigh along -- these boys are just that charming. Okay, okay. I know I sound a little cynical. But in an age where bands seek relentlessly to out-clever one another with the most ironic punchline-turned-moniker, Radiant Darling seemed a little straight. How happy I was to learn that the band named themselves after a woodstove. That’s the kind of quaint I can deal with.

In the end, of course, Radiant Darling don’t sound like either of the bands I had in mind -- they’re much better, and much more surprising. They hail from Chicago, and are: Ami Saraiya (vocals), Ben Gray (percussion), Savoir Faire (violin) and Casey Meehan (guitar). Saraiya first put the band together in 2002 when she met her initial collaborator, guitarist and programmer Scott Blackburn. Radiant Darling was formed in the wake of her departure from funk/R&B band Pelvic Delta in 2001 when her songwriting began to lead her in different directions. In which directions, you ask? Saraiya says her head was full of a “mishmosh of Johnny Cash, Indian folk tunes, Radiohead, old country lullabies, Billie Holiday, Bjork, and bad '80s pop” and was about ready to explode. Well, explode it did, and Cryptomnesia is what was born.

If you took Billie Holiday, added a little Lhasa, some Bjork, and a smattering of Tom Waits (just to taste), you’d have a vague idea of what Ami Saraiya’s voice sounds like. It’s full-bodied and playful, edgy and lithe; it roars and growls, belts and thrashes, and, every so often, purrs. It settles on no particular mood for more than a few seconds, continually rousing the ears with its contortionist capabilities.

If I were to choose one adjective to describe Cryptomnesia it would be haunting. And that’s just after listening to it. Delve into the lyrics and you get into some downright uncanny territory. Saraiya isn’t interested in telling the same old story. Because of their epic, mythic elements and Saraiya’s conscious tapping of various historical genres (rag-time, jazz, blues, country, Indian folk) at once, her songs radiate with the energy of some treasured long-lost thing rediscovered. Upon first listen, you get the feeling you’ve heard these songs before -- not in their present incarnations, sure, but they resonate somewhere. The exceptional thing is that while they sound familiar, they sound entirely new. Because this resonance seems so simultaneous and unforced, it’s interesting that Saraiya’s more than aware of it. The album’s title, Cryptomnesia, is, by definition, “the appearance in consciousness of memory images which are not recognized as such but which appear as original creations.” She says Radiant Darling chose this name for the album because their idea of music creation is that we re-create what we’ve heard and been influenced by (while, if we’re lucky, putting our own spin on it.)

The theme of re-creation is not only infused in the sound of Cryptomnesia, but is the subject of many of the songs. “Familiar” and “By Jove” are based on a myth that the band developed which they say is derived from many other myths they’ve heard. A god and a goddess, whose passion for one another is so great that they destroy each other and, as a by-product, create the sun, happen upon one another in a bar millenia later. When their re-incarnated versions meet, something is stirred, but their memories remain murky. “Familiar,” the female take, is a smoky, latin-esque incantation. The protagonist starts out unsure that she recognizes the former god -- “you seem familiar” -- but the song builds into a climax of passionate certainty; Saraiya shows her vocal chops when she sings “you know I didn’t mean what I said when I cursed you out into the black black night.” “By Jove,” the yang to “Familiar’s” yin, shows the god in a much wearier state. He’s mystified by why the girl at the end of the bar is staring at him: “Don’t she see that I’m a washed up old rag / I lost my power.” Saraiya’s Waits-like growl on the lyrics “I never wanted to be such a predictable son of a bitch” is even more compelling when you know that she’s impersonating a former god.

Crytomnesia’s remaining tracks are each as various in their subject matter as their sound. “Versadh” fuses trip-hop with a Gujarati sample while Saraiya layers a colourful and hypnotic (and seemingly more personal) narrative above it. “For Mary” and “The Otherside” both embody circus themes and are appropriately perplexing. Saraiya writes lyrics for “Tears,” the Django Reinhardt/Stephan Grappelli classic, and takes it down unexpectedly dark track. “The Outcome” is likely the most easy-listening track on the album, but even it manages to subvert its simple-love-song sound with its cryptic repeated message: “The outcome is almost here.”

I’m not a New-Ageist, neither am I overtly spiritual. I don’t get my tarot cards read, and the times I’ve had that forced on me, I haven’t really paid attention to what was revealed. I don’t carry crystals around in my pockets, nor does the scent of nag champa help me unwind. Reincarnation is a nice idea, but I’ve never put too much consideration into what I might re-emerge as. How does this relate to the discussion of this album? While Radiant Darling might, all aspects of their thing considered, seem a little “out there,” Cryptomnesia casts a spell. Sure, it might be a fitful and hallucinogenic one, but it’s got a charge all the same.