1. Rivers In
2. The Promise of Wood and Water
3. Perilous Straits
4. Washed Ashore
5. Jubilee 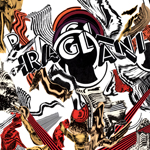 After a century of twiddling with the knobs of modular synthesizers, splicing magnetic tape, collecting field recordings, borrowing from foreign musical traditions and doing what we now merely refer to as “sampling,” pioneers of the electroacoustic arts have fundamentally improved music. Now, the world is host to sonic landscapes—turbulent oceans, jagged cliffs overlooking arid savannah, blighted cities reminiscent of Blade Runner‘s Los Angeles. Joe Raglani’s Of Sirens Born, inspired by recordings of Latin American folk and the treacherous jungles depicted in Werner Herzog’s Aguirre, the Wrath of God, takes the listener on what sounds like a voyage through a creek of sludge in a dark sewer of St. Louis, Raglani’s post-industrial home base. Awash in grumbling drones and dissonant harmonies, swollen with a tension that rarely finds release, Of Sirens Born is at once terrifying and sublime.

St. Louis hosted a tight-knit music scene in the ’80s and ’90s, but many artists abandoned the city’s downtown wasteland during a massive gentrification campaign in the mid ’90s. Raglani stayed and founded Pegasus Farms Records to produce film-inspired compositions that bring to mind Wolf Eyes’ heavy doses of feedback and the textured atmospheres of Christian Fennesz. Of Sirens Born, created in a four-month drug-addled frenzy and first released as a CD-R on the obscure Gameboy label, is an amibitious achievement: a 35-minute sonic epic that should be experienced in one sitting on headphones. The trip begins with a quiet, high frequency ring that eventually grows into a distending miasma of sine waves. In “The Promise of Wood and Water,” low and dissonant drones congeal into wavering bedrock, while blissful guitar plucking gives the murky atmosphere a touch of innocence and hope. Moving into “Perilous Straits,” the beatific plucking vanishes to make way for layers of grumbling, screeching and howling electronics. Thematically, the dreck is cleared away on “Washed Ashore,” when an ear-piercing pitch erupts into digital squiggling and squawking. And the heavenly overtones in the closer, “Jubilee,” suggest that the journey has finally come to an end. But even after the album goes silent, the ominous mood looms like a dream.

A former professor of mine, who recently finished the last grueling edits of her second novel, once compared writing fiction to building a house out of dental floss: What starts as nothing eventually grows into a structure so delicately built that it can collapse or evaporate with the slightest touch. Practitioners of noise and ambience face the same challenge—a dauntingly limitless gray zone exists between a corny FruityLoops patch and Brian Eno’s Ambient series. The floss in Of Sirens Born, as it were, never reveals itself. Some listeners might not feel comfortable exploring this pitch black sewer. Yet its toxic clouds and alien beings are so mysterious and alluring that many will want to exit the real world and drown here, hoping, perhaps, to melt into the record’s oppressive froth.