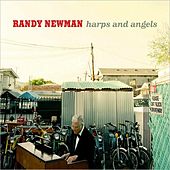 I can’t be the only person to think it just that Randy Newman’s path to stardom lay almost exclusively in songs he’s performed for children’s movies. No one remembers his sole top ten hit, “Short People”; they’re probably more like as not to remember the theme from The Natural before that little seventies misfire. But you probably all know “You’ve Got a Friend in Me” (or else the theme from Monk), and that recognition sits so comfortably in the Newman mystique that, writing it out now, it almost can’t be true. But of course it is: he’s long introduced the peerless “Sail Away” as an eighteenth century jingle for slave owners, and was rewarded with a cover by none other than Ray Charles. Such is the duality of the Randy Newman thing: he is, after all, a man so steeped in classicism and New Orleans’ stride piano (he studied songwriting in UCLA) that he was almost guaranteed to fail as a solo performer. But his songs—arch, dry, and ironic as any he’s ever written—were celebrated (and covered) by all the right people, so he had no problem once telling an interviewer that, while his sparse audience was frustrating, it didn’t matter: “I’m fabulously wealthy.” Riches and critical respect: really, what else is there to ask from a career in American pop?

Movies are, of course, an American innovation; the songs on Harps and Angels are American valedictories. The album is a half-hour note through Gabriel’s trumpet, which may sound like good news to the evangelicals until the record finishes. Then they have to contend with the fact that, contrary to their bumper stickers, they haven’t gone anywhere. In fact, they’re stuck with us, watching American dominance recede in the sunset like the Spanish Armada Newman conjures in “A Few Words in Defense of Our Country.” Don’t let that title throw you, either: he’s speaking to future archaeologists. “Our current leaders may be the worst we’ve seen,” he speaks, emphasizing “we,” “but they’re hardly the worst our poor world has seen.” This isn’t a warming argument, especially when he later points out how one in Caesar’s line named his horse to “like, the vice president or something!” But he pauses, and your mind’s eye sees noted horse-appraiser Michael Browne. Maybe Newman sees him, too. “No, wait a minute, that’s not a very good example.” Ah, he thinks, “the Spanish Inquisition … I don’t even like to think about it.” The music stops, and you wait for the punch line. Of course, he isn’t going to say Gitmo out loud, but such associations are so obvious that he has to say something. “Okay, sometimes I like to think about it.”

Newman’s best albums and songs worked because of the plausible distance between narrator and songwriter. There seems to be little on Harps and Angels. Instead, he brilliantly fuses the public and the personal by drafting the contours of their common (and incipient) mortality. He gets close enough to the afterlife to observe that God speaks French to his angels. “Tres bien!” Newman shouts, attempting to get on their good side after the man Himself admonished the singer to “keep your business clean,” lest the kettle drums come after him next go round. The singer is duly chastened, and finishes his story with the proof that “there is an afterlife / and I hope to see you all there / let’s have a drink.”

Even funnier is “Potholes,” an ode to senility which utilizes a central metaphor: “God bless the pot holes down on memory lane.” Pretty corny stuff, sure, even if Newman gets it over on curmudgeonly whimsy (“I’ve had my doubts about / the ethics of the so-called ‘fairer sex’ / pfft fair about what?”) until he gets to the doozy in the second verse. Turns out young Newman once had a bad day on the pitcher’s mound, and walked, by his reckoning, “fourteen kids in a row.” Naturally, he cries and runs from the field. Flash forward some twenty years later, where he introduces his bride-to-be to his father. “Right off the bat / he was telling her the story about how I walked fourteen kids / cried and left the field / and the next time he met her / told her the same goddamn story!“ A few memories like that would’ve made his autobiographical Land of Dreams (1989) a lot easier to digest.

So would songs as strong as “Losing You,” a piece on par with anything from Sail Away (1972) or Randy Newman Creates Something New under the Sun (1968). Empathy is the trait he least likes to share, perhaps because it makes those songs that much stronger (“I Think it’s Going to Rain Today,” “Louisiana 1917”) or because his film work requires so much shmaltz (“If I Didn’t Have You,” too many others to mention). Either way, “Losing You” is a gut punch even without the song’s biography (the song was written after Newman’s brother treated the son of two Holocaust survivors, who was diagnosed with terminal cancer), and it takes a writer as accomplished and attentive as Newman to provide the light touch this song has. He imputes the word “never” with a definition that should sober anyone attempting hyperbole: “when you’re young and there’s time to forget the past / you don’t think that you will, but you do / but I know I don’t have time enough / and I’ll never get over losing you.”

Without a word to the attendant cruelties of totalitarian and hateful politics, “Losing You” lassos the personal and public hells of Harps and Angels together. It also fails to derail the mischief and good humor throughout the rest of the record, and for that Newman demands high praise. One imagines how easy it would be to churn out harmless children’s tunes well into the winter years, painting his house with Pixar’s royalty checks and performing the occasional European tour. We shouldn’t get carried away: surely he’ll remain in every film executive’s rolodex until his death. But for this glorious album, he joins the ranks of Bob Dylan and Johnny Cash as the kind of songwriter who can remain substantive, challenging, and enriching forty years into a career.