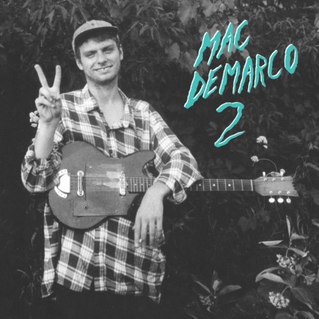 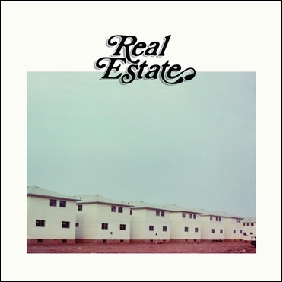 First of all: I’m sorry. I’m sorry that you had to read the words Real Estate and Mac DeMarco in the same headline. I’m sorry that your laptop or tablet or whatever started combusting in protest from the amount of breezy indie rock it was being asked to inhale. And I’m sorry that these are my two favourite records of the year. Should I feel bad? Probably not, but I do. I feel bad that I’ve over-listened to them. Who plays a Real Estate record in excess of a hundred times? Who listens to one Mac DeMarco song on repeat for a week? That’s me. I feel guilty about indie rock. I can’t stop. Blame poptimism.

Atlas and Salad Days are connected by my indie rock guilt. I’ve bonded them over their basic natures, as pleasing guitar rock records that could—in 2014, when we’ve all but matured beyond wanting to listen to Wavves—be relegated to chillwave status. As if it wasn’t infuriating enough that I have to be attached to these records I’ve heard a hundred times before under different names, and still feel the pull of their super vague platitudes (“This is not the same old town I used to know”…“Take it slowly, brother”), they also sound effortless, like these songwriters deliberated over their tensions for seconds before letting the sun shine instead. Maybe I’m not feeling guilty—maybe it’s jealousy, like I’m angry I’ve fallen for indie rock’s lifestyle posturing one more time. As if a song could be this damn easy.

They shrug their problems off differently, I guess. DeMarco, he slacks. His songs sag behind with a knowing grin, like a kid walking a cross-country sprint everyone else is breathlessly committed to (That’s me! Shit, this is coming together). Real Estate, on the other hand, spend their time breathing in and out. They say they’ve got problems, and Atlas is plenty anxious—compared to the melodic indifference of Days (2011), it’s a plaintive record, about sleepless nights and long-distance love—but that anxiousness gets released, like all Martin Courtney needed was a clean chord and a chance to speak his mind. He can go from “Talking Backwards,” a wistful sigh of a song, to “April’s Song,” a guitar-dueling instrumental that is perfect and a little bit intentionally wonky and I don’t need to tell you that it is amazing to listen to on a park stroll.

So if I wanted to get deep about these records, tell you that they sting me, or make me think about how the best days of my life are behind me—that seems to be their chosen theme, when they want one, the ineffable sadness of not being able to hold onto yesterday—I’d be ignoring the fact that Real Estate and DeMarco are pretty well cheered up by the time they end. On “Navigator,” Courtney sings about heading into town at the end of a week so great he’s forgotten what day it is; on “Johnny’s Odyssey,” DeMarco fucks around with a guitar riff for a while, lets friends improvise some shit, then says thanks for listening. These guys are hardly big on the whole “I still haven’t got it figured out!” vibe twenty-something indie rock is supposed to roll with, as if it were an actual existential crisis. They just like clean guitars, and employ rhythm sections that play their instruments like I touch type.

These songs are just too gentle. They have an ease of spirit that you can enjoy and learn nothing from. Salad Days is an easy affair in this regard, a simple record to listen to under the sun that has a couple of knowing winks about going steady and treating your pals right, but nothing you need worry about. Its chill normativity is a contradiction, because you can ignore those stern lyrics when the riffs are this slow, when they echo out like sunglasses covering eyes. Atlas has a slightly different kind of presence, but a similar intentional disconnect. It tries to make you feel something beyond what you see. It makes you want to go find all the checkpoints Courtney sings about; when he sings about the monuments of his city on “Navigator,” I see the ones scattered around mine, be it our half-impressive museum or the walk-in chess boards old dudes hover around in the day. When he talks about his old neighbourhood on “Past Lives,” mine comes alive in front of me, so much so that I was compelled to take a stroll around it while I was home, to see if it had anything to say about itself. It didn’t; it was just fucking there.

In the same way DeMarco dolls out little bits of sage, faux-uncle-y advice, Atlas wants to make a point. It wants to say “hey, you, doesn’t this all look different now?” In my opinion, though, it just ends up painting a portrait—its bass is the late evening sky, its slowly interlocking riffs are empty roads creasing into one another, and its chords are…houses? It’s just a picture—it doesn’t document the change. “Past Lives” is a song in which Courtney walks around his neighbourhood alone, when there’s nobody around to relate to the picture that it’s become. It’s a Sunday, I guess, a lazy apocalypse where everyone’s dead (uh, in bed). Somehow, Atlas captures this feeling of small town emptiness perfectly—the feeling of staring into something that no one else is. The music Real Estate make is so melodic and plentiful that it could capture any feeling it wanted to—Atlas just transposes their sound into the evening—so I have to assume that this vibe comes from Courtney’s lyrics; he never references the town he’s talking about, or even what it looks like, so it becomes a blank slate for you to behold. All he really references are the bigger things that impose on it: horizons and long distance phonecalls.

I love that these records both have intentions coded into them, even if it’s by accident. I love that Atlas tries to make you yearn for the first place you called home, and that Mac thinks he can walk you out of your stupid boring life like a stoner’s Pied Piper. And I love that they fail to deliver on these ideas. Is anyone gonna stop working 9 to 5 because they heard a lyric that told them to? Not on a record as chilled and one-speed as Salad Days. The guitar sounds like a timeless task that only DeMarco can master, because only he has realised what punching the clock truly means. And instead of feeling a nostalgic pang in my heart after listening to “Past Lives” I just feel like I’ve experienced some of the most vivid, scene-evoking music I’ve heard in years. It’s little more than another really good still life.

So I guess I get what people mean when they sneer at these kind of records, and call them “nostalgic.” Nostalgia is a kind of nihilism, when you think about it (or when you use words as loosely as possible). Indie rock like Atlas and Salad Days is the proof—it cruises by on its choruses and spins out lyrics that sound the way they do because that’s how they’ve always sounded. I’m brought back to Best Coast, when I think about these records, because missing someone in a Best Coast song is the same thing as being out of weed, and it’s never as important as the chord sequence. The lyrics on Atlas are sublime—and when I first heard “Talking Backwards,” I thought they were gonna make Real Estate a meaningful literary band—but they’re also placeholders. “I had to hear you / just to be near you” goes between gorgeous and vacuous in a moment. The couplets DeMarco sings on Salad Days, meanwhile, are just necessary, and regurgitating them feels like a disservice, because they need the record’s guitar tone to get sung at all. I’m not taking his advice; I’ll take a guitar lesson, though.

I should have a defence, I guess, but I just feel guilty. I feel bad I’ve fallen for these records at all. They’re little more than ambiguous sighs about the days of yore, knowing that a sigh with the right intonation can become a hook, that if you play your instruments beautifully and write your lyrics decently that’s the only thing that matters. They’re the kind of records that make you think summertime is a career and indie rock is a good lifestyle decision. Interestingly, I think what makes them feel connected is those moments where Real Estate and DeMarco take on grief, let themselves feel it, only to annul it. I believe they’re trying to say something about that, but it’s their easy answers I adore. It’s the fact that like DeMarco’s living room, probably, nothing changes. I wonder: should my favourite music of the year be the stuff I’m literally taking nothing from? I don’t know; my scrobbles are off the roof. I should probably leave the house. I don’t wanna end up like that.