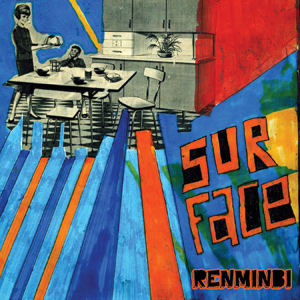 Worldly elements are hot in New York City. Among the examples: David Longstreth’s guitar style is often compared to King Sunny Adé’s; Vampire Weekend draws a parallel between a popular Congolese dance and WASPs having sex in “Cape Cod Kwassa Kwassa”; and members of Gang Gang Dance have been known to favor London grime, Iranian pop star Googoosh, pygmy music, and God knows what else. With highlife-style guitars, reggaeton beats, and vague references to tribal music all the rage, Brooklyn’s Renminbi (the name of China’s currency) almost comes across as a nostalgic throwback to the classic indie rock sounds of Northwest bands like Unwound and Sleater-Kinney. But nobody is copying anybody on Surface: its raw power glimmers with a uniquely passionate touch.

Recorded live by the esteemed Sonic Youth engineer Don Fleming, this EP (which can be downloaded for free at cashmusic.org) follows the lyrical course of a doomed relationship. SMV’s simple synth lines leave much to be desired, but they work as a subdued counterpoint to Lisa Liu’s incredible guitar phrasing—shiny riffs that ascend, descend and twist around to express a range of emotions. The slicing licks of “Portland” are mad with a sort of uneasy happiness, while the stabs in “Toulouse” at points resemble big, silvery teardrops. In “Set-Up”—when the relationship reaches a breaking point—SMV’s buzzing bass and dreamy synth and guest drummer Jenny Johnson’s cymbal-smashing, snare-rapping beat are the most distinct elements, matching the delirious fury of Liu’s guitar and vocals. In “Then We Came To The End,” Liu’s slow chopping-motion chord progression perfectly evokes the theme of the song, which is belted out by the band like a Facebook update: “Everything falls away.” Indeed, there is hardly a sweet moment in these twenty minutes.

What Renminbi lacks in Afro-beat loop pedal experiments it more than makes up for in rich textures and sheer power. Considering that the bashing on Surface already has its subtleties, it will be especially intriguing to hear what this promising band produces when there is a happier topic at hand.