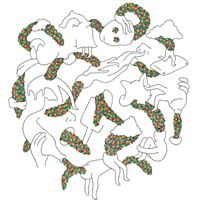 If you’re between the ages of 18 and 28 and you aren’t a regular reader of Alternative Press, you might be inclined to dismiss Reptar based on name alone. Basically, if someone handed me a flyer advertising a show with Reptar, I would be confused as to why the Warped Tour was being held at a dive bar instead of the local fairgrounds. Admittedly, judging a band by its namesake can be a tricky matter: Fall Out Boy unwittingly referred to its own throwback mission when its members decided to name their pop-punk revivalist project after a Simpsons character that debuted at the same time as Drive-Thru Record’s inception; and it would be difficult to find someone that would say that Kid Rock does in fact, rock. Yet, Reptar’s success is how thoroughly they defy pretty much all dismissals with their debut EP, Oblangle Fizz, Y’all.

Despite being signed to Vagrant, Athens, GA-based Reptar is certainly not a mall-punk band, and you’d be hard-pressed to hear even a lick of a guitar on the four-piece’s debut EP. Bits of musical kitsch (the background of “Context Clues” sounds like a compilation of noises from an Animal Crossing game) litter the tracklist like so much Hot Topic bargain bin finds, but each and every song practically requires dancing.

Actually, the word dance does the EP a disservice—“dance” is what people who listen to Matt and Kim do when they listen to Matt and Kim, I think—because this shit actually requires attention. For one, “Raindance,” starts off sounding like “Reelin’ in the Years,” but ends with requisite partaking in what I call the “Modest Mouse dance,” which is essentially whatever cigarette-wielding teenagers sitting in a used Honda Civic and flailing violently to “Lounge (Closing Time)” do. The album shifts wildly between exhilarating and anthemic, from melancholic and confessional to totally removed, all within 25 minutes, and often within the same minute. While an umbrella term for Reptar’s sound might be electro-indie-pop, the band frequently triumphs over the effeteness—and the Passion Pits—that label sometimes implies. Although “Context Clues” descends into a blatant MGMT cover at the two-and-a-half minute mark, the “Raindance”‘s hard-driving beat inspires the same adrenaline-fueled abandon as ’80s hardcore.

The band, like its cartoon namesake, is ultimately lighthearted fun, though both the show and the band have some darker undercurrents demanding tighter scrutiny. Rugrats was ostensibly peddled to kids, but some of those episodes played out (and even looked) like an acid-induced nightmare. (I’m not even kidding when I say that I’m still afraid of the Passover episode, and I’m sure people feel similarly about the one that made millions of elementary schoolers think that if they ate a watermelon seed they would die.) Similarly, the lyrics of Oblangle Fizz, Y’all seem preoccupied with morbid aspects of the imagination and our self-protecting instinct to rationalize or suppress them.

“Blastoff,” for example, describes a relationship between two selfish lovers who seem to derive a perverse satisfaction from determining who can go the longest without being polite to the other. The second track revels in the same brand of confusion: “Stuck In My Id” chronicles the singer’s transition through the Kübler-Ross model of grieving over a failed relationship, first with a proclamation of wanting to “make it with another and another,” but once the protagonist moves to a wakefulness (whether literal or figural, it’s not specified, but at least signified with the appearance of breakfast), he realizes he made a mistake and wants to “make it the same.” The track finally and predictably ends with a resignation for him to “look for meaning on [his] own.” Essentially, the guy starts off disavowing any sort of loss (denial), moves promptly along through a period of longing for the irrecoverable past (depression), and, ultimately, resigns himself to striving for self-acceptance (uh, acceptance). This theme prevails yet again with “Phonetics” alluding to “emotions buried in emotional oceans.” What that means, I haven’t the slightest clue. All I can tell is that singer Graham Ulicny either doesn’t want me to know or can’t figure it out himself.

Leitmotifs that appear again and again are those of concealment and cognitive dissonance—the suppression and veiling of emotions, intentions, and basic impulses. Sometimes, though, and more often than not, the listener’s experience is one of being on the bus and listening to some self-important person talk on his Bluetooth, then hearing the guy put the damn thing on speakerphone, and then realizing the person on the other end is the same person. Even though, lyrically, this album is an argument taking place in front of a mirror, the basic fact is that the record is, musically speaking, as id-ridden as a newborn baby. Admittedly, such a “fun” record having this kind of substance behind it is disconcerting, almost like someone swallowing a bunch of helium and then reading you passages from Sade.

It’s unclear whether those behind Reptar are aware of the irony they exude, or if their juxtaposition of fun and gravitas is purposefully contrived. Ulicny will take every and any opportunity to mention in interviews that his prerogative is to get hips moving, but a lyric in “Phonetics” seems to add depth to that assertion when he confesses, “When my body moves like that, it means I’m depressed.” The song is the least frenetic on the EP, and it concedes a deeper message: dance as an escape. Which might seem odd, a band with the singular mission of getting listeners to engage in the communal activity of dancing but inevitably admitting that “we are alone,” but the sentiment matches up cleanly with the band’s blatant juxtaposition of “cuteness” and dorm-room psychology.

Unfortunately, what I consider the biggest boon to Reptar could easily be someone else’s biggest complaint about them. The songs are catchy and heartfelt, sure, but the protean soundscape I would describe as “heavily textured” is also indulgent and unfocused. I personally like the idea of a fledgling band writing songs that play like arguments both lyrically and musically. Hell, it’s kind of charming. But, I digress—sometimes a cigar is just a cigar, and a song is just a song (even though I’m disappointed in myself for not trying to go somewhere with the title “Blastoff”), and it shouldn’t be that surprising to anyone that a band has used their first physical release to simply experiment with their image and their audience’s expectations, to middling but promising results.

I guess a more succinct way to put all of this is to say that when Reptar isn’t inspiring people to gleefully wreck their apartments, they’re sort of like Vampire Weekend with fewer references to Hyannis Port and more references to “something lying dormant in [his/your/my] brain.” Also: more references to a fictional reptile that appeared sometimes as a candy bar and other times as a wagon voiced by Busta Rhymes. It actually fits perfectly for this band, that the guy who wrote “Break Ya Neck” is behind some beloved childhood memories?