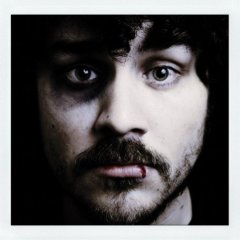 Swift has never been afraid to play with music and identity, releasing lo-fi Tin Pan Alley, baroque pop, krautrock, and ambient under various guises such as Dicky Ochoa, Company, and Instruments Of Science And Technology. As every amateur psychologist will tell you, however, when you play-act for so long it’s only a matter of time before you lose track of who you’re supposed to be. That’s what seems to have happened on As Onasis I & II.

As Onasis I & II bears no resemblance to the Randy Newman inflected pop gems we’ve come to expect. Mostly instrumental, this is as dumbed down as music can get; it trades on lazy 12 bar blues progressions and lack-luster jams built on piss-weak riffs. By rights, it should have been released under a different name so as not to sully the Richard Swift brand. However, there is a pleasing rawness and some excellent ebullient drumming which at times recalls Paul McCartney’s self-titled debut. Unfortunately, where McCartney was incapable of stopping his infectious charisma from shining through on even the most basic of tracks (such as on the organ led groove “Hot As Sun”) As Onasis struggles within its four-track limitations to create any real kinesis. Some songs appear more than once—“Opt 1,” “Du(m)d Pt.1,” and “Sign Language” appear in various incarnations—and others fail to even validate their existence.

“JLH,” one of the more promising cuts, begins with a great drum and tambourine break, a strange strangled vocal and then…it just goes on for a bit. I could say it’s like the blues as seen through the eyes of Faust or some shit but it lacks the balls to maintain its locked groove to the point where it becomes hypnotic. At just under two and a half minutes it just doesn’t define itself. It’s just there. Noise. Stuff. Dust bunnies.

And therein lies the problem. There is so much that could be said about the album and about Swift’s modern take on blues music but: when you boil it down this is music that is not very good. I could roll around probable inspirational sources like the Sonics, Link Wray, or even Nashville Teens (“SM60” keeps threatening to lunge into “Tobacco Road” but never manages to progress beyond the intro) but, ultimately, I would hate to impose any sort of praise through association.

Whatever intent Richard Swift had in mind for this ragbag of odds and ends, the gimmick is lost on me. The end result is a turgid mess, the type of which is spewed out by thousands of stoned bands armed with a four track and a couple of Howling Wolf and Neu! CDs. Thankfully, most of those haven’t the ability or the bare-faced audacity to release them for public consumption.

File next to Chris Gaines.