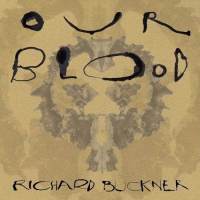 Here’s a potentially misplaced but genuinely held theory for you to consider: Richard Buckner’s new album, Our Blood, is so casual in its execution that many listeners may be overlooking the fact that it is, in most every respect, totally inspired. I mean really, truly inspired—a streamlined, no bullshit singer-songwriter effort rendered as acutely affecting and quietly soul-piercing as anything released all year. So while Buckner’s nonchalance is a big part of his and this album’s charm, the unexpected frustration Our Blood occasionally elicits in me has an equal amount to do with the fact that most other artists working this vein are simply lazy in comparison. Sure, if Kurt Vile’s Smoke Ring for My Halo proved anything this year, it’s that slackers can still pull it together every so often, but nevertheless there’s something beautiful about hearing professionalism chiseled to its bare essence. From this perspective, then, Our Blood is something of an anti-Smoke Ring: laser-focused melodies, expert, unfussy musicianship, and an intricate, crystal-clear mix. It’s disarming in its immediacy, and impressive in its narrow yet rich home studio aura.

This represents a slight change of pace for Buckner, who’s spent a decent amount of time fidgeting with structure and sonics recently, though he hasn’t actually released a full-length in five years. As nice as most of that music was, however, its restlessness could occasionally come at the expense of songs. That’s not a problem one can attribute to Our Blood in the slightest, though it’d be shortsighted to see this as a regression. Not unlike Marissa Nadler’s recent sonic reconciliation on her latest, self-titled LP, Our Blood is intrinsic and natural in a confident, expressive, and personal manner, showcasing a gifted veteran taking stock of his talents while tapping into a genuine, unpretentious mode of artistic expression that is a welcome return to economy. That he had to actually work through this material on three separate occasions—it’s a long story, but it involves broken equipment, a stolen laptop, and Sonic Youth’s Steve Shelley (who in the end only appears on a single track, contributing maracas)—may go some way toward explaining its pinpoint demeanor, yet the fact it’s been translated in such a pure fashion belies its belabored creation.

Lucky for us, the album as a whole tends to thrive on these paradoxes. Buckner’s described the feeling of the record as one of “being caught, armed with some barbed momentary reasoning that won’t let you go,” and borne out of a similar necessity, he ended up recording Our Blood almost completely solo, yet its subtle embellishments bespeak an artist with a broad sonic outlook. Extending from his early country-tinged efforts to this album’s more polished acoustic-pop bent, Buckner has consistently renegotiated the parameters of traditional singer-songwriter productions. Most of the nine tracks here consist of little more than a lonely acoustic guitar and softly contrasting keyboard accompaniment. It’s a spare but involving sound, establishing a distinct atmosphere while allowing Buckner’s evocative lyrics to play out in sharp, concentrated bursts. Album opener “Traitor” sidles a stalking keyboard hook just behind Buckner’s semi-urgent vocal melody, mirroring his words as often as they seem to be answering his vaguely antagonistic inquiries. “Held and returned / Who did you cry to? / Was someone else too close to find?”, he questions, his voice ringing out across a hollow expanse of pedal steel and increasingly distorted keys.

The way Buckner’s voice and chosen instrumentation continue to take shape and intertwine across the record’s remaining eight tracks is impressive enough (check the disorienting channel-skipping keyboard line that envelopes the stark ruminations on “Thief”); that the music is never offered up as a sacrifice to Buckner’s reflective narratives but instead is allowed to blossom through his words is evidence of an instilled confidence that has found proper outlet in these particular surroundings. It feels increasingly uncommon that a song such as unassuming centerpiece “Collusion” could conjure such palpable emotion through such oblique phrasing (“From the hollow prayer you were sleeping through / As you went nowhere, the cold would come as they’d always done / And run into almost anyone”), but it’s to Buckner’s credit that he keeps his imagery grounded with a least one foot in reality, allowing the listener to impart experience in whatever manner they see fit.

“Confession” currently rests closest to my heart. Perhaps the record’s sparsest song, it also feels to me like it’s most vividly emotional and directly personal. Read into its lyrics how you will—“Come when you can, so close to the light you won’t understand”—but the audible pain in Buckner’s voice in universal. Our Blood, like most great singer-songwriter efforts, is open to interpretation, but it’s the record’s malleable sense of emotion that lends it its peculiar gravity. Turning over these songs on multiple occasions seems to have paid off in the most unusual of ways: instead of feeling rushed or numbed by the gestation process, Buckner has emerged with one of his strongest albums yet. “If there’s a story,” Buckner stated recently, “it will end where it began and then keep going, free to stop, but never knowing why it should.” Extenuating circumstances may have attempted to keep Our Blood from reaching fruition, but let’s hope Buckner continues to persevere and create in a similarly unencumbered manner, with as little conscious regard for the what and whys of career trajectory, collaboration, and expectations as possible.