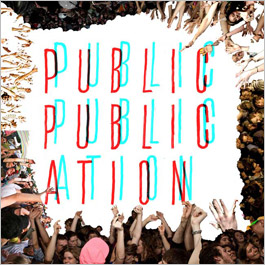 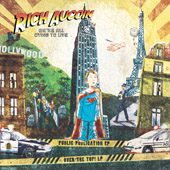 We're All Dying to Live

There are essentially two breeds of music lover in Canada: those who believe Rich Aucoin to be one of the best live performers currently working, and those who’ve yet to have the pleasure of experiencing Rich Aucoin perform live. That’s not an exaggeration, I swear; his shows are borderline transcendental, thought back on in awe and disbelief in equal measure. I’m not even worried about overselling to you right now, and if you’ve seen him before you know I couldn’t even if I tried. That’s partly because you don’t even know what to expect: you probably have a rough idea of the basic elements involved—he’ll be playing music, you’ll be standing, the bar will sell overpriced beer, etc.—but you have no better idea of how the end result will play out than if I knew that Citizen Kane involved a newspaper tycoon and a sled.

It wouldn’t even be particularly accurate to describe Aucoin’s live show as an “indie rock concert,” at least not in the sense that, say, a Vampire Weekend live show resolutely is. The defining feature of a concert is that an artist performs to and for an audience, and Aucoin never does that; he performs with his audience, and not in an unimportant or forced or gimmicky way but in a way that somehow feels both natural and totally revelatory. What results looks a little like a Flaming Lips show, only instead of Wayne Coyne tumbling around on top of a crowd in a giant inflatable ball it’s the entire audience that’s encouraged to roll around doing something ridiculous. And if you share my guarded skepticism for “audience participation” schticks and groan at the thought of having to do anything at a concert other than cross your arms and drink PBR, you’ll walk away surprised at how involved you got and how much fun you ended up having—Aucoin has some kind of preternatural talent for coaxing everybody in the room to contribute and an even more impressive talent for ensuring they each have a good time. He’s like somebody’s life-changing 8th-grade English teacher, a charismatic but down-to-earth leader-type who just knows intuitively how to command a room and involve everyone in it.

I mention this at such length because it’s both the reason We’re All Dying to Live isn’t perfect and its excuse for not really needing to be. Which isn’t to say that this record, Aucoin’s debut full-length after two strong EPs, is deficient in some egregious way, particularly if one is approaching it with fresh ears. As a standalone document it’s still one of the strongest indie rock records in recent memory (though those are admittedly harder to come by now than they were even five or six years ago, when precisely this sort of post-Funeral stuff was at the height of its popularity), just as energetic and full-bodied as Sufjan Stevens’ The Age of Adz (2010), the last great album in this vein. Its aesthetic influences are usually pretty easy to spot, but then Aucoin never strains to hide them much. As is typical for contemporary indie of this variety, Bowie, Byrne, and Wilson emerge as the principal touchstones (there’s even named a song for the latter), but cues taken from less obvious sources (In “Living to Die” I hear some of Tortoise’s “Ten-Day Interval,” which itself sounds like Steve Reich) keep things interesting while showing off the depth of Aucoin’s record collection.

The four songs which comprised last year’s Public Publication EP have each been recycled here (though they return tweaked and under mostly different titles), and it’s unsurprising that even over a year old they still stand out as four of the album’s strongest tracks. If it seems odd that three of these four tracks have been reedited so that they now span six separate cuts, consider the sweep of the album as a whole: Aucoin’s deliberately grouped many individual tracks into seamless, miniature suites, so that what sounds like one complete piece might in fact span three or four smaller units. I’m not sure if this was a self-conscious strategy intended to strong-arm listeners into taking in We’re All Dying to Live exclusively as whole, but its sequencing frames it as exactly that. Nearly impossible to divide or cherry-pick at your whim, this is an album that demands by its form that you listen to it as an album, which is a quality as uncommon as it is strangely commendable. And it’s a strategy that benefits the scope of the album itself, which is heavy on instrumental interludes, extended introductions, and distinctive pieces linked by shared refrains or recurring motifs. It’s clear that a great deal of care and effort was put into the structure and flow of this thing, and it’s understandable that Aucoin would want us to hear it the right way.

That sense of unity is especially remarkable when you consider the sheer volume of contributors involved in the production of this project, which by Aucoin’s official count totalled “over 500 musicians, friends and fans from across Canada.” You can certainly hear the numbers in the music: for the most part this is sweeping, expansive stuff, packed with details and flourishes the origins of which one can only speculate about. (The climax of lead single “It” sounds like it has a few hundred people alone.) But, to his credit, Aucoin’s audaciousness is (thankfully) matched by his restraint, and We’re All Dying to Live never sinks under its own weight. The end result has depth but sounds streamlined, tight, and mercifully unfussy, and given the breadth of musicians at his disposal and the amount of raw material he no doubt tore through to get here, Aucoin’s self-control is maybe his most impressive quality.

500’s an intimidating number, of course, but for Aucoin it’s unsurprising. His performances prove he’s a great unifying force, bringing together disparate groups to sing and dance and just generally have an unforgettable time. To call his enthusiasm for music and for people and for life itself infectious is an understatement; Aucoin’s the veritable enemy of cynicism, as close a thing to “life-affirming” as I’ve ever seen. If I feel the need to outline just how much more incredible his live performances are than his recorded material, I don’t mean that as some kind of backhanded compliment—it’s just too consistently exceptional an experience to avoid talking about, and even if it’s an unfair comparison it’s one that’s perhaps inevitable. But even if We’re All Dying to Live is “just’ a prelude to seeing Aucoin live, a teaser for whatever preposterous social event he’s got planned for you, it’s still an important component of the best night out you’re liable to have all year. And since you’ll be singing along to all of these songs soon anyway, you might as well start learning the words now.