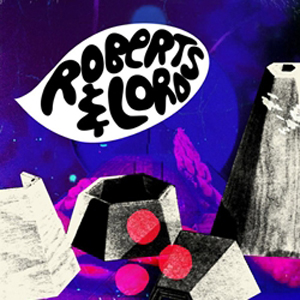 Blame the Postal Service? Ever since Ben Gibbard and Jimmy Tamborello started mailing snippets of beats and melodies to each other, resulting somewhat serendipitously in the yet-to-be-followed-up indie touchstone Give Up (2003), one has the impression that writing a great song is really no more complicated than asking one person to fill the gaps in another person’s skill set. All nebulous notions of volcanic chemistry, nurtured since the we’re-stuck-together days of John and Paul, Mick and Keith, Lindsey and Stevie, are thrown out the window in favour of the far more convenient myth of a bloodlessly utilitarian exchange of services. Is it ironic, then, or compensatory that albums produced this way are either keening and emotional, ADHD dancefloor manifestos, or, in the case of Roberts & Lord, both?

One half the eclectic pop-accumulator Rafter Roberts (known as Rafter), one half Black Ghosts’ and ex-Simian Simon Lord, the appropriately-titled Roberts & Lord has the feeling of flippancy. Because Eponymous, like Give Up, is the product of a correspondence-collaboration, and so can’t help but feel either charmingly or frustratingly pastiche, depending on your tastes, but perhaps more because of Roberts, whose fingerprints are all over this as both producer and songwriter. It’s difficult to know who, if either of the collaborators, took the lead on this project, but one hears here the same penchant for shoehorning in every last idea that made Rafter’s 2010 album Animal Feelings difficult to lock eyes with. Lord is a passenger on the runaway train that is Rafter’s ceaselessly morphing arrangements. It certainly has none of the cohesive appeal of Simian’s early 2000s work, if that’s what you’re looking for.

But move the goalposts and you’ll find a lot of charm here. The days of the expensive, immaculately constructed studio effort are, if not gone, then changing for the better, and Eponymous is yet more evidence of that change. It’s a loveable DIY effort, stitched Frankenstein’s-monster-style together into junkyard symphonic. These arrangements shudder and clang like steampunk prostheses, and Lord gamely emotes overtop, so that at the album’s best—opener “Mosquito,” first single (do albums like this have singles?) “Oblique,” and the Beck-lite of “Interior Demon”—Roberts & Lord hit their stride together. Elsewhere, as on the puzzling, directionless “Menuhin” or chiding “Windmill,” the two inevitably display the identity crisis attending an album made without its songwriters ever meeting one another in person.

All questions of process aside, Eponymous is exactly the sum of its parts. Rafter Roberts makes production seem sort of effortless, but as a font of songwriting ideas he is as badly in need of an editor now as he’s always been. Lord is not a collaborator who can look Roberts in the eye and tell him to cut out the 25% of his arrangements that represent his weakest material, instead opting to lend a soulful voice to the equation and leaving it at that. That’s all that was ever expected of such an off-the-cuff project, and the results are occasionally—surprisingly, even—very nice. Here’s hoping next time they take it a step further.