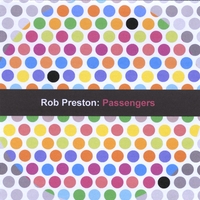 To be Made In The ’80s can be sure to guarantee you of two things: a shit taste in t-shirts and a thirst for the music of yesterdecade. Today the charts bristle with the effects of a twelve-year timewarp, old feuds healed by custom MySpaces and the promise of a surging merchandise stall. Pink Bomb, then, must look like something of a speck on the lens of the producer’s retroscope, famed only for a quartet of club-friendly seven-inches and for providing the go-moment on some progressive Global Underground anthologies. Still, that hasn’t stopped main man Rob Preston from stepping up for his own nibble at the comeback pie, having shaken hands with all the estranged members of himself to transform eight years in the sand into a monolith of bedroom technology. He’s ditched the Pink Bomb moniker—presumably to avoid detention for suspected membership of a Clause 28 terror cell—and has vaulted outside of his former trance habitat to make Passengers, a pop machine spruced up with digital trickery. In terms of the recent sweep of minimalism it’s about as cool as a kiln gone critical, but releases like this are more about muscle than sinew.

So what precise sub-genre does Preston practice for his hour of resurrection? It’s a tricky one to pin down. From the word “go” he’s carefully dodging pigeonholes, keen to flash as many of his pearlies as possible. “Trust In Me”’s vocal simplicity and contagious beats mimic a coked-up Flight of the Conchords, the Kiwi deadpan replaced with a neon guitar scribble cloned from “Chant No. 1,” while “Broken” is a dark electric migraine that blossoms into cinematic dewdrops. There’s no doubt that Preston’s tightened his craft since his dance tent heyday, having now perfected that spinmaster’s penchant for spreading operatic lyrics across a programmed melody. The high point of this maneuver is arguably “What About Us,” where a scorched gush of pads collides beautifully with tropical breakbeat. The vocals are left to run gently while Preston mixes Rolands and gut-string into a deep and luscious cocktail. It’s sweet like noon Um Bongo and more eighties than Koala Blue. One swallow and you’re hooked.

If by now you’re thinking “Easy Listening without the apostrophes” then you can rest assured you don’t have to delve far at all to see the full extent of Passengers‘ legwork. The mechanised salsa of “Jazz Mag,” where Bee Gees licks and elastic rap fence round each other like Wii wands, is at odds with the piano heartache and waves of ice that make up the big NASA banquet of “Thanks For The Memory.” Back to back with the slow tonic of “Destiny,” it feels like radio on the last planet in the solar system: from here on, you’re off the map. In space, though, no one can hear you cringe, so it’s up to you how you react to the lasery grime of “Put ‘Em Up”: think cracking the seal on a barely-cold time capsule to find it contains nothing but Scatman. It leaves you genuinely unsure whether you want to cower or dance. The latter might be the smarter of options, however, as numbers like “Go Postal” are not for sitting down to. It’s Gatecrasher by numbers and hoovers gone berserk; the kind of club flourish Way Out West ballsed up when they accidentally released Intensify. It would seem that being a DJ’s like riding a bike for our Rob: never forgotten, with plenty of fast wheels and grazes.

Whatever your poison, Preston’s second-generation debut has got at least one moment that’ll win you over completely; it just depends on your headstate as to which one of the sixty-two moments that’ll be. Of course there are traces of filler here, but you’ll get that wherever there’s someone laying slabs, and the slivers of boredom within these twelve tracks are outweighed by the multiple crests of delight. It’s all very well for Australians to commemorate their summer with In Ghost Colours—they’ve got the weather for it, after all—but on Preston’s side of the pond things are a mite more fluid, with the July sky changing at the flick of a switch from dazzling UV to something the colour of girders. It’s a lucky coincidence, then, that the best bid for Summer Album UK 2008 comes from a Brummie recluse named after a town made mostly of cement. This one mixes easily.