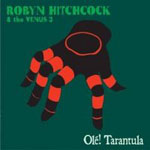 Robyn Hitchcock and the Venus 3

Never one to stick in a genre too long, Robyn Hitchcock is back with his first proper album in two years. Rather than a continuation of the country-twang jokery of Spooked (2004) or the solo acoustic vibe of Luxor (2003), however, Ole! Tarantula serves as the follow-up to the out-of-the-blue Soft Boys reunion album Nextdoorland (2002). That was a thoroughly entertaining, occasionally very good record that never quite lived up to Hitchcock’s previous peaks. The same could be said for Tarantula, perhaps, but this one fares a bit better.

I should be upfront here: I have a definite soft spot for Hitchcock. His absurdist song-writing strikes me as both funny and touching, especially when delivered with that self-degrading smirk. Others, meanwhile, find him excruciatingly dull and bit of a twit. But come on: Hitchcock wrote arguably the best pair of opening songs of the ‘80s: “I Wanna Destroy You” and “Kingdom of Love.” (Ed.: Though “Let’s Go Crazy” was pretty fucking good.) Over the course of the last few decades, this guy has written a gaggle of consistently good songs, ratcheting together four great records. Sure, none of those have been in the last 15 years, but he’s about due.

Which brings us to the Venus 3. Beyond long-time collaborators Kimberly Rew and Morris Windsor, this new band incorporates members R.E.M. (Peter Buck, Bill Rieflin), the Minus 5 (Scott McCaughey), and at least one member from both The Faces and Harvey Danger. While this may seem a bit of a clusterfuck, it actually comes together quite well, and beats out the Gillian Welch/David Rawlings team on Spooked. Ole! Tarantula feels cohesive, like it was made by a band that both knew what it was doing and how to work together. This is no small feat for Hitchcock.

The other surprising bit about Tarantula is the restraint shown. Ten songs is an opening act for Hitchcock, not an album. Sure, the songs are a bit longer than normal, but it’s still a much more compact, streamlined effort than he’s known for. It works in his favor: there’s not the feeling of fatigue that sets in with even great records like Eye (1990) or Fegmania! (1985). While there’re still one or two weak tracks (namely “The Authority Box” and the title track), there’s not much fat here at all.

Nothing shows that better than opener “Adventure Rocketship,” a song every bit as playful and fun as you would expect from the title. Hitchcock could have easily written another verse or two, but cutting it off at just under three minutes is an informed touch, especially with a sprawling second track like “Underground Sun.” The sort of hazy, vaguely psychedelic vibe of “Museum of Sex” and the overly long “Belltown Ramble” suits Hitchock well, and the band crafts it well: all warm guitar tones and fuzzy horn lines. The woozy “Red Locust Frenzy” falls in with these tracks, though Hitchcock moves back into the rock with the straight-ahead bop of “’Cause it’s Love” and the wistful, down-tempo “N.Y. Doll.”

Hitchcock has been in the game 30 years now. His back-catalogue is thick, confusing, and often contradictory. He’s never been one for a direct career progression or the simple way of doing or saying things. He can be charming and frustrating, and certainly plenty of the latter in the last few years. I’m loath to call Ole! Tarantula a return to form, not only because I don’t think he ever really lost it, but also because it’s hard see what it would even mean for him. Regardless, it’s a fine record -- one of his better in some time. For a man with a skill more for writing songs than records, this is a good sign indeed.