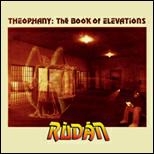 Theophany: The Book of Elevations

Rodan of the Monsta Island Czars opens his solo debut Theophany with an intro featuring a film sample of undisclosed origin. A man speaks about how angels seem to be the tools of God’s justice and punishment, harbingers of death and destruction. “Did you every wonder what a creature like that must be like? The whole existence spent praising your God, but always with one wing dipped in blood. Would you ever really want to see an angel?” The brief intro leads directly into the piano and string herald of Rodan’s arrival, like a comet streaking down in through the atmosphere, an angel falling. His flow is fast and brutal and relentless; his rhymes are incredibly intelligent and colorful. At the beginning of most of his verses, Rodan blurts a quick “Hey, yo” before unleashing a torrential downpour of vivid metaphors, similes, detailed anecdotes, historical and cultural references… everything from the Bible to the death of Laura Palmer in Twin Peaks. The rhymes even take on a poignant poetic quality in certain passages.

Rodan rushes in on “Wind Before The Storm.” “Nigga looking sweet on the screen like Clark Gable/ Rolling with pr-prime elements/ Highly unstable/ Hydrogen tell helium to tell oxygen to save my seat at the periodic table.” He’s sinister on “The Conqueror.” This is dark, hard, intensely lyrical underground hip-hop; many could accuse the beats of being cheap and badly mixed (most of them produced by X Ray), but they carry a self-conscious, endearing lo-fi quality that recalls the recording sound of MF Doom’s Operation: Doomsday, and they serve as effective, atmospheric backdrops to Rodan’s grizzly verbs and nouns. Over slinky bass, minimal drums, a horror movie music box key line, and a creepy whisper, Rodan spits “I cut the head off the devil, and I throw it at you.”

“F.E.D.’s” showcases Rodan’s storytelling when it comes to accounts of crime and the constant struggles in the ghetto between civilian and criminal, cop and suspect, all prisoners. “Kickin’ raps and snappin’/ So you know what’s gonna happen/ Son, there’s gonna be a clappin’/ Send this faggot bleed away/ But he bled straight to the chaplain/ On the hush and humble/ ‘Cause he’s a badder, wise cat/ Sit back, scrutinize warriors/ Metabolize that.” “No Snakes Alive Pt. II” features the first head-knocking beat on the album (though still dark). It begins with the beautifully crooned hook, and it ends with Rodan’s sole, lengthy verse. “Roll Call” features Kong, Kamackeris, Gigan, but none of them can match Rodan’s verse which roars out of the gates with: “Capital city night/ Blood that is written, prison on a kite/ Put that crab outta sight/ Blow that scalliwag like his first name was Kid Dynamite/ When they home/ Flirt with women that stare/ Macking off your feminine flair/ Short skirts, fly cinnamon hair/ Grimy niggas got angst/ Sorta like tanks through Tiananmen Square.” And it just keeps going like that.

An old school beat that smells of 1988 supports Rodan’s lyrical virtuosity on “Flight Lessons,” and the album opens up to a couple of brag tracks while Rodan more than proves himself worthy of the boasting. He rips the mic to fucking pieces with his wit and energy. Yet, the album still feels like it’s beginning to lag a bit, weighed down by the oppressive beats and Rodan’s iron fist of a flow. “No Degrees” features a bass line that seems just off of “Come Together” by the Beatles and has a catchy hook, but “War in Heaven Pt. II” returns to the beat of the first part with new rhymes, and it’s a revisiting that feels a bit like filler. “The Wilderness” fails to stand out production-wise although it features an interesting concept and Rodan’s consistently great rhymes: “Rodan ain’t just spirit/ Different persona/ One man intellectually radiating like a corona/ Devour trick serpents like the rod of Aaron/ Bolstered over the planet/ In my eyesight, the Earth is barren.”

The album swings back upwards with its last stretch of tracks. X Ray delivers one of his better beats on “G.O.D.” with his utilization of a horn loop, and Rodan vehemently spits verses from the perspective of the “Great O’Mighty Dollar,” god of the modern world. Rodan continues the incisive social commentary on “Human Inquisition,” in which he takes all of mankind to task: “Fuck the human race/ This whole fuckin’ planet’s a disgrace/ I want to take a billion guns/ Shoot every six billion of these motherfuckers in their motherfuckin’ face.” With that violent opening line, Rodan grabs attention by the throat and holds onto it as he dives into a sharp analysis of human depravity and folly. The song would be almost unbearable over one of the dark beats common on the album, so it was wise for the track to run with a much lighter and pleasant cut of music provided by Ravage.

“Century 21” glides upon a gorgeous key melody that feels instantly familiar. It’s a nice beat from B Wize with equally nice verses from Rodan and Megalon. It’s followed by a pretty decent Monsta Island Czars posse cut (although the verse from King Ghidra, a.k.a. MF Doom, is disappointingly brief). The album finishes with the great “Ability to Speak.” It’s produced by Heat Sensor, and it certainly resembles the dark gray material that he contributed to the Viktor Vaughn album that came out last year. Rich synthesizer tones wriggle together, and Rodan raps, “We monsters and men/ Gods and animals/ Embody the human dichotomy/ Mythical spirits intangible/ Consume flesh and vegetables/ Killer instincts with cannibal/ In my city fantasy video/ Produced by me and my manski/ Directed by Rodan Polanski.”

Theophany: The Book of Elevations is poorly paced and loses its momentum in places. Rodan barely takes a breath or a chance to switch things up, and the beats will probably sound a bit dull to the ears of many heads. Yet, this is a rapper’s rap album. Rodan’s presence on the mic is formidable, brilliant and terrifying. Not unlike a hip-hop angel fallen to earth, a being with scorching black eyes who grasps the microphone like a flaming sword.