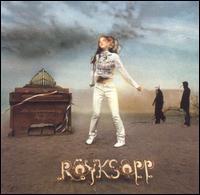 Unceasing obsession with hyping every (possibly) promising new artist often has the side-effect of drowning attention for older, more reliable artists that are often far better than newbies. For every couple over-hyped backlashed-against last-for-a-week mediocre acts that sends the critical community into fits, an excellent artist’s album gets passed up, or worse, has lazy cursory judgment passed on it so that critics can move onto the Big Things of the month.

Röyksopp’s latest, The Understanding, is one such excellent album, likely to be overlooked for its breezy pop air, or for not sounding “new.” But I’ll take Röyksopp over 90% of the artists that have released novel and not-so-novel albums this year. Certain artists’ albums sound like they’re effortless because they’re actually lacking in effort, but Röyksopp’s albums sound effortless because these guys are just that good at turning out great downtempo tunes.

Plus, The Understanding, despite its unsurprising shuffling drum-whispers and windex-clean synth lines, mingles with some deeper ambitions. “Triumphant” opens the album with an immediate directional change; gradually heaving forward on a rhythm that progressively intensifies its hi-hat patters and cymbal-work, the song becomes a bass-behemoth that nevertheless brings along plenty of delicate melodic elements and synthetic choruses for its rousing ride. Later, “Circuit Breaker” drives forward on deep bass pulses and inventive percussion, keeping typically emphasized mid-range synth elements as subtle background to its darker tones and thrust.

Of course, a big stylistic change for Röyksopp would not only be risky, but considering the quality of their output, such a move would be foolish. “Only This Moment,” a picture-perfect single, may reassure a Melody A.M.-lover that not too much has changed. But despite its traceable roots back to the group’s debut, it’s deceivingly dense, packed with textured synth lines, and downright beautiful harmonizing vocals that build upon the song’s already pretty melody. “Moment,” like a number of the other tracks here, moves like liquid, but the alloy of song writing elements that makes up that flow is highly detailed and deft. Its percussion displays the same subtle evolution that Röyksopp seem to nail without even thinking, and even its otherwise cookie-cutter downtempo vocals attain much greater emotional complexity than one would expect by virtue of the group’s ability to layer them, develop them and expand their complexity.

Of course, none of it sounds particularly studied; you might not even hear the great bass line of “Follow my Ruin” as it perfectly interlocks with odd-beat chords and synth bounces. The gentle listlessness of “Beautiful Day Without You” may be so entrancing that you miss exactly how delicate and unpredictable its melody is. “Someone Like Me’s” melody and perfect production is as good as anything that Air has put to tape, and you’d hardly notice it. But all those elements and much, much more are there. It’s to Röyksopp’s credit that they can pass off cerebral downtempo as immediately accessible pop.

The thing that renders The Understanding excellent is that the deeper ambitions I mentioned earlier are all over nearly every track here, even the seemingly light ones -- it’s just that they don’t make any overt grab for attention. They reward attentive listeners with halfway decent attention spans. For those who can’t wait for the Next Thing, those qualities are lost -- but then again, why bother impressing them anyway? They’ll just forget what they were listening to within a week.

And that’s why I have so much respect for Röyksopp: they’re so very good while being so very understated about it. If you think they’re fit to be little more than designer boutique background, sure, you can think so. But the irony is that while everyone is scrambling to hype up or bite back against the next music quirk fads and novelties, the shopper at a boutique playing Royskopp is being exposed to far more expert --- and ultimately, just plain better --- music. In the end, no one’s really going to hype up Röyksopp, and that’s just fine; they’re one of the precious few artists going that just don’t need it.