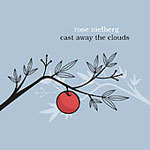 Cast Away the Clouds

I was introduced to Rose Melberg during my freshman year in college. Our courtship was short; I was meeting a lot of musicians at the time and in no hurry to settle down so soon, but when the right song comes along, sometimes the choice makes itself for you. That song was The Softies’ “Charms Around Your Wrist,” and it led to a long, blissful affair that has yet to lose its magic. Still, as time wears on, relationships – and the people in them – change.

Cast Away the Clouds is Melberg’s second solo release, and really her first proper album after the odds-and-sods collection Portola. It’s been eight years since then, and five since the completion of what was to be The Softies’ final tour after the release of Holiday in Rhode Island. Not every romance could withstand so much time apart, but Melberg’s music has always inspired more than just casual infatuation. What makes Cast Away the Clouds easy to love is the fact that she has changed, and for the better.

While recasting Melberg as a mature singer/songwriter with this release degrades the depth of her earlier work, there’s no doubt that these songs are reflective of a more experienced perspective. For perhaps the first time, the prevailing sadness that defined even her happiest work with The Softies seems to have turned sunny. The differences are subtle and hard to discern at first - a bent note there, an insistently delivered harmony there – but there’s a real joy in these songs that felt locked away before. The intervening time spent raising a family seems to have caused the singer/songwriter to blossom, and though none of these songs are about her new life (or so she claims), her contentment shines through despite the rainy-day lyrics.

“Take Some Time” opens the album with immediate evocations of The Softies: medium paced guitar strumming, wordless verse harmonies, minimal piano touches and lyrics of apparent despair. While the framework is similar, though, the content is not, and the song serves to bridge the new and old material. This time around, Melberg is playing an acoustic guitar rather than a jangling electric, and the second voice (and third!) isn’t former Softies duet partner Jen Sbragia, but Melberg’s own.

Each of the twelve songs is tastefully arranged, with Melberg playing and singing all but a few parts performed by a pair of close friends. The tracks are spare and without frills, often just a guitar or two and vocals. It’s amazing what Melberg is capable of doing with so little. Singing with herself on “Spin” allows her to showcase her new emotional range by playing two voices against each other, with the higher-pitched melody aiming for smiles and bliss while the lower is restrained and almost forlorn. It would be satisfactory enough for the song, a narration of the end of a summer romance, to simply pair the two conflicting emotions, but instead it reaches resolution as the second voice finally relents and melts into an effusive conclusion.

It’s in the harmonies, always a Melberg trademark, that she really gets to cut loose: the chorus of “Cold Sea” is one, in every sense of the word, and the multiple voices of “Take Some Time” explores all kinds of harmonic possibilities. The album’s most exuberant song is “Irene.” Uncoincidentally, it’s the only track with drums, and as such, is a revelatory display of pop music. At just under a mere three minutes, it effortlessly fuses high-reaching countermelodies (calling them harmonies would hardly do them justice) with waltzing jazz piano and a sighing look back at high school: “So dumb / what you wait for will come / oh Irene / no one’s strong at 16.”

Unfortunately, the energy of the instantly lovable “Irene” sets a precedent that the slower second half has trouble living up to. The blue-noted “Little Bird” recalls Elliott Smith’s “Little One” without the hazy psychedelics, but loses some of that song’s appeal as well. “Constant and True,” as the album’s only duet with another singer, could have further emphasized the tension between the male and female voices. Still, in the presence of such finely crafted and lovingly performed songs, these are minor oversights.

The inclusion of the flute in “Four Walls” is probably overkill, but it’s significant of the humor of the album. Melberg’s fresh approach is most effectively exemplified on “Each New Day,” which finishes the record as strongly as it began. The song’s rhymed narration of unrequited love and teenage dreams (“I go slightly crazy nightly / thinking of how to win your love / but the best I can do is dream of you”) is as old as the popular song, but this time there’s a catch: “Don’t you know I hardly sleep anymore / again, it’s after 4.” The twist, set against the backbeat emphasis of piano accompaniment, turns another slow, sad song into a sweet rumination on what it really means to dream of someone. Like Melberg herself, Cast Away the Clouds is humble and unassuming, but its wit is no less sharp for the soft delivery. Alone at last, she’s never sounded more personal – or more quietly, wonderfully happy.