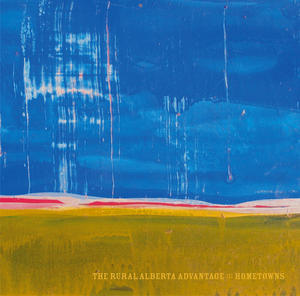 Hometowns was originally self-released last summer to uniformly glowing reviews, but self-marketing, -distribution, and -promotion prevented much from happening for this three-piece beyond the borders of hometown Toronto. For example, when these guys performed in Ottawa last year, it was at a large venue which was empty except for the show’s promoter and a friend of the drummer. On the backs of a Saddle Creek signing, eMusic accolades, and generic blog swell, their most recent show saw them moving to a smaller club and packing it past capacity. Things are going very right for the Rural Alberta Advantage. Feel the hype.

Does Hometowns stand up? It’s not so surprising the Rural Alberta Advantage are creating this kind of buzz given the Elephant 6 in the room—the aesthetic similarities to indie-BFF Neutral Milk Hotel are more than conspicuous, and put the band squarely in Rock Plaza Central OMG! NMH-revivalist territory. In fact, it’s curious that so few reviews have noted the stylistic overlap between the two Toronto buzz bands, particularly given the similarity between Rock Plaza Central’s lead warbler Chris Eaton and the Rural Alberta Advantage’s own Nils Edenloff. And like Rock Plaza Central’s terrific Are We Not Horses? (2006), Hometowns‘s juxtaposition of country twang and abrasive bombast—mixed in with the ideas of other Neutral Milk Hotel-revivalists like Beirut and Okkervil River—will certainly satisfy any desires you have for more of the same. I’ll leave the answer to the question “are we still yearning for 1998 in 2009?” up to each of you.

But stripped of discussion about influences, does Hometowns stand up on its own? The record is pretty straightforward, running the usual gamut of upbeat rock numbers and country slow jams. The most outstanding element of the Rural Alberta Advantage’s music is the overwhelming work of the band’s drummer, Paul Banwatt, who doubles as one half of another great Toronto band, Woodhands. Banwatt’s proven his worth on the Woodhands’ enjoyable Heart Attack (2008), but the shift from Holy Fuck-like dance-rock to indie folk may be surprising. Even better, rather than adjust to fit the genre, Banwatt simply provides unconventional and…well, fucking awesome percussion. But having seen them live, I have to say this album doesn’t really carry the weight of their amazing show. The album is front loaded with standout tracks like “Don’t Haunt this Place” and “The Ballad of the RAA,” for one. Compare the wicked electronic-influenced high hat riffs that scuttle through “The Ballad of the RAA” to the much less interesting break-shuffles that fumble beneath “Sleep All Day,” the band’s lukewarm take on Yo La Tengo. The two don’t really match. And the band’s attempts at lo-fi distortion tracks are occasionally misguided. “Luciana” is a fun song (although, hello “Holland, 1914”; like, could this be anymore trying to be that song? It even occurs at the same thematic place on the album!) But what’s up with that phasing? It’s distracting more than cheaply charming, and it’s not the only spot where the production choices are less than stellar.

There are other issues as well. Lyrically, the band isn’t all that fascinating. “Drain the Blood” features the line, “I’m really trying to make it through the night”; I wonder if it’s the thematic cousin to Twilight‘s anti-pre-marital sex narrative. And the general theme of geographic dislocation and urban disillusionment versus the idyllic whatever of the countryside? Is “Edmonton” about Toronto versus Edmonton? Or Edmonton versus Red Deer? Or New York versus Toronto? Or a love letter to the northern lights? Or just a lame lyric that makes the mistake of equating some mythic female body with natural landscapes and phenomena? Answer: it doesn’t matter, because the track is damn boring regardless. I mean, the lyrics aren’t bad or anything; I just wonder how a band with such a hard-on for Neutral Milk Hotel isn’t trying for something a little more…esoteric.

And whatever, because these problems don’t negate what’s wonderful about this album. “The Deathbridge in Lethbridge” pulls off the lo-fi rawk better than “Luciana,” and throws some interesting lyrical ideas out that complement the ragged way the band romps through what otherwise would be a fairly conventional chord progression. “Rush Apart” carves a beautiful melody out of a kick drum, hand claps, and a rollicking acoustic guitar. “The Deadroads” steals a few ideas from the Shins (when they were still good) and really highlights the role the drums play in these early album tracks. In fact, up to “Luciana” I’d say the album deserves all the praise it’s getting, and though the quality drops at the halfway mark, tracks like “Air” and “In the Summertime” are still okay. And that’s enough to make me hope that the hype that convinced 148 additional Ottawans to check these guys out live (myself included) at there most recent show does not carry with it in equal proportion backlash and insta-disdain. The Rural Alberta Advantage are an excellent Toronto band that before this year nobody outside of Toronto cared much at all about; here’s hoping their follow-up manages to capitalize on what’s good here to make something really memorable.