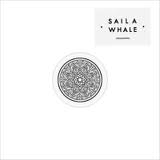 As we fast approach 2011, what are we supposed to do with Sincerely Yours, the mysterious Swedish label responsible for some of the more interesting records of the late-2000s Balearic revival? The artists responsible for their best releases, label owners the Tough Alliance and pop wizards Air France, have gone all but silent, prompting Tough Ally Eric Berglund to go solo as ceo to good (but not Earth-shattering) effect. jj, the label’s most publicized act in the last year, proved itself as all too real through mediocre live performances, overdoses of Lil Wayne fetishism, and a disappointing, hastily released second LP.

Sail a Whale—another anonymous, likely Swedish electronic group to have its music released through SY—doesn’t really appear to change these trends in any clear way. Their first releases were remixes of The-Dream’s “Love King” and countrymates Korallreven’s “The Truest Faith,” though neither did a whole lot to transform either work into something that one could uniquely identify as by Sail a Whale. More than anything else, the group has a Tumblr to show for its existence, a collection of photoshops and music videos built on gorgeous, ambiguous imagery indebted to the French New Wave.

This Francophilia extends to the group’s music, which mostly sounds like M83’s Before the Dawn Heals Us (2005) and Saturdays = Youth (2009) without a Kate Bush soundalike. The group deals in soundscapes built almost entirely on gigantic, high-end heavy synthesizers and breathy vocals of indeterminate gender, most of which flirt with texture more than they ever choose to deliver songs. It definitely hits a handful of SY’s reference points (late eighties and early nineties dance music and indie culture, prettiness, a sense of intense melodrama), but it’s arguably the least pop-oriented release the label has ever picked up, one that leaves almost no impression beyond its essential niceness and the familiar synth textures,

Extended intro “Find Me a Boy” feels like it builds for four minutes to nothing. An eroded kick and reversed ambience give way to a gigantic synth lead and hazy, reverb-drenched vocals, but there’s no sense of momentum to it; the beat never changes and the mix prioritizes repetition over melody, with the electronic kick at the forefront the entire time. This would be fine if the next song, “A Sea Inside,” provided any sense of resolution, but the same thing happens again, only without the kick drum.

Finally, seven minutes in, the artist provides at least some sense of release on “See You Inside,” which at least opts for propulsive percussion and a sense that a song could be emerging, but it chooses to hide underneath swirling synthesizers and never take advantage of the clear structure presented before it. “Event” at least has house-indebted piano lines at the end, and “Remainder” almost sounds like a real song, as a voice delivering enough of a melody to at least hold onto finally emerges several minutes in, carrying it to a mildly satisfying conclusion.

In short, if you loved the interludes on Before the Dawn Heals Us, you will love this record; here’s almost half an hour of them. For everyone else, myself included, I can’t help but wonder what, exactly, Sincerely Yours is going for here. While I can’t help but admire their label for its largely quite solid catalog and for cultivating a rather specific sound, this is the least memorable thing they’ve ever released. It’s too pop-oriented to be functional as minimal music and too minimal to function as pop music, leaving it somewhere uncomfortably in between. Perhaps the forty page manifesto included along with purchases of the EP explains some of this. Perhaps Sincerely Yours’s next grand prank in a tradition of unpredictability is, in fact, to simply release boring music with the same sense of high drama and mystery with which they’ve released everything else.