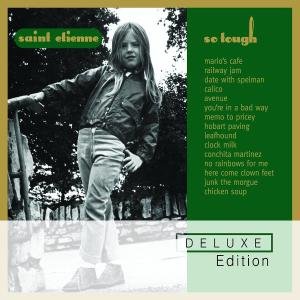 There is nothing if not a huge number of Saint Etienne products available to the discerning music listener. Over the last eighteen or so years the band has issued seven studio albums, far too many singles compilations, nearly a dozen fanclub-only releases, three EPs, and two original soundtracks, as well as Richard X’s recent track-by-track reworking of debut Foxbase Alpha (1992) into Foxbase Beta. Between the flood of Saint Etienne products out there, and their availability—at the San Francisco Amoeba last July, I saw numerous copies of many of these records and not a whole lot of demand for any of them—it’s difficult to conclude that Saint Etienne reissues are truly necessary.

In spite of this surplus, given their timing, the reissues are almost understandable. Gothenburg-based duo Air France, along with their Sincerely Yours labelmates jj and the Tough Alliance, have found a fair amount of success making music that’s indebted to Saint Etienne’s, and especially to their first two albums. They’ve captured those records’ optimism, warmth, and use of sampled dialogue to build their own musical universes, and it’s not terribly difficult to construct parallels between their aesthetics. Henrik Markstedt of Air France has stated that “there’s a sense of geography and architecture in what they do.” Like Sincerely Yours’ reimagined Sweden as a lightly drugged, lensflare-drenched beach party, Saint Etienne imagines a fantasy version of England—London in particular, perhaps—built less on rain and the high cost of living or whatever actually exists and more on sixties pop culture, which they then filtered through then-contemporary equipment, to sometimes now-dated and sometimes still hugely successful results.

Sixteen years later, So Tough is almost undoubtedly the band’s greatest success. Whereas Foxbase Alpha occasionally veers too close to house music clichés and Tiger Bay (1994) may stray too far from the concepts that Bob Stanley and Pete Wiggs formed their band upon, this record possesses a sound that even now feels strikingly theirs—dreamy but not shoegaze, twee without being unbearable, able to borrow from American pop music without sounding nauseatingly derivative—and one that yields the most immediate, approachable music they ever made. “Mario’s Cafe” establishes this from the outset, as even in this slightly-compressed remaster, it’s Sarah’s Cracknell’s vocals, the chorus’ Motown-quoting strings, and every part of the arrangement other than the unchanging drum line that stand out.

From there, the album offers a whole lot of strikingly idiosyncratic production that transcends what does seem slightly dated. “Railway Jam” and “Calico” both suffer slightly from their trip-hop leanings, but Q-Tee’s vocals on “Calico,” especially in contrast to Cracknell’s, render it less generic and more weird. “Avenue” is certainly long at over seven minutes, but its haze and fleeting harpsichord prove far more compelling than they have any valid reason to be. “You’re in a Bad Way,” especially in its original mix, is a nearly perfect palette cleanser—even if the band thought it was inexcusably silly at the time—and easily one of the most straightforward pop songs the band’s ever written. “Hobart Paving” and much of what follows it foreshadows Tiger Bay‘s more grandiose and melodramatic moments, but that album’s Europop leanings don’t manifest themselves here to such an extreme, making it a much easier thing to consume almost twenty years removed.

As a whole, So Tough‘s greatest strength is almost certainly its remarkable cohesion, especially given its cheeseward leanings. “Conchita Martinez” and “Junk the Morgue,” while distinct in their productions and arrangements, blend effortlessly from one to another, more than partially because the sampled dialogue that moves from track to track serves as an anchor, quelling the urge to skip tracks. The expanded edition’s bonus tracks vary in quality and necessity. The band’s cover of “Who Do You Think You Are” was on the original US issue of So Tough, and it’s still quite good. A few moments seem to provide the missing link between New Order and balearic synthpop duo the Embassy, whose albums have proven quite influential amongst their Swedish peers, the Sincerely Yours roster included. There are a fair amount of curiosities, like the vocal version of “Railway Jam”; a bigger, Van Dyke Parks-arranged version of the already-great “Hobart Paving”; experiments, like the remarkably slow “Johnny in the Echo Cafe”; and baffling covers of “Rainy Day Women” and “I’m Too Sexy.”

Whereas Air France and their other recent followers offer something more compressed, dense, and difficult to pick apart, it’s hard not to be drawn in by the more expansive vision presented here. Warmth, optimism, and some sort of persistent youthfulness win out over much of what should make the record an artifact of a strange crossroads of British indie pop and nineties dance-pop in which the finished product isn’t so much unbearably annoying nor boring as it is completely adorable. The fact that it happened, and that it’s still rewarding, is a welcome surprise.