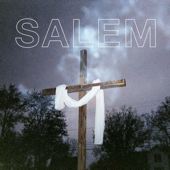 King Night is some throbbing, deep, spittle-choked death music; it sounds like an overdose at a rave, depraved, unholy; it also rules, in its evocation of this venality. Salem are the best of a burgeoning microgenre called, with characteristic microgenre misfortune, witch house or drag. I prefer “drag,” in that it lacks exact precedent and we can then view what Salem have crafted here not as a cute genre cross-pollination but as something whole of itself. Their fellow-travelers in this game rely on haunted house gimmickry and hip-hop affectation, having the feel of a more committed Danger Mouse or more focused Girl Talk; to these joke-y lads, I say, give the title “witch house.” Drag, on the other hand, implies the pull of a heavy narcotic, and its commingling here with party sonics implies the enthusiastically private goings-on of a shitville apartment complex. If you know what Coricidin is then I am talking directly to you, or more accurately to what is left of you.

The movement exists between a lot of neat tag-line intersections—say, “DJ Screw and Burzum”—but on King Night and its anticipatory mixtape I Buried My Heart Inna Wounded Knee it amounts to much more than that. For those with a taste for both Houston and, um, Hell, its appeal is all-consuming. I tar myself guilty, awaiting feathers. Wounded Knee emerged unexpectedly in August, a diffuse 43:23 of unnatural structure, frequently crumbling when it should be climaxing and phasing between tracks with an almost aggressive lack of sense. It endeared, mostly, in theory—as a practical explanation of what drag might sound like at its best—but it endeared all the same, particularly when Salem filtered recognizable sounds like Nico and Gucci Mane into the murk. When so emboldened, their production power is transformative, suggesting an intriguing future as vagabond remixers. As the authors of a coherent mixtape, however, I am not so certain. Wounded Knee is a one-listen triumph, perfect for streaming via the Internet and pretty much nothing else ever.

Lucky, then, that King Night ditches this miasmic structure for ten clear-cut tracks, each containing what could be called hooks, choruses, and so on, even if mostly instrumental and/or evil. Where Wounded Knee wheezes—there is a five minute stretch of what appears to be a dead little girl playing an acoustic guitar—King Night‘s got bounce. Miles of it, too: this might qualify as party music, to a type of person. “Trapdoor” is the most hip-hop thing here, and also a clear highlight, coming across a lot like the Block Beataz in its clipped swagger but with RZA-dirty synths. (Also: car crash sound effects, to huge payoff.) This triumph flips to “Redlights” and “Hound,” which both trick out big pop synth lines with 808 drum rolls and unintelligible lyrics, and flashes of Reznor-at-his-best production flourishes. Each track’s appeal is individualized to specific sonic elements: a blissed out rap here, a monstrous drop on the hook there. All of which is to say that, despite its imposing cover and sonic reference points, King Night is a remarkably accessible affair, a crossover bid from a genre that has not yet, and maybe shouldn’t be, an underground thing. Emo tweens, take notice.

Which, to anticipate a backlash that may or may not occur in the event of a crossover success or in the event that people start hating this microgenre merely because of its popularity/awful name (I see you, anti-chillwave sect), is not a bad thing. Like Fuck Buttons, Salem proves that experimental music needn’t be merely difficult, and that those experiments should be geared toward something. King Night is that thing, the sound of something wholly new (as explored on the mixtape) given a wonderfully snappy coherence. Like I mentioned above, on Wounded Knee they sample Gucci Mane and Nico, a handy set of reference points for people lazily playing spot-the-influence. On the proper album such obvious referents aren’t needed. Salem evokes the seismic thrill of a good Gucci drop alongside all of Nico’s ghostly beauty within the very framework and timbre of their productions. The result is no less than one of 2010’s most exciting debuts.