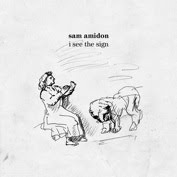 Sam Amidon’s third album, I See the Sign, opens on the least folk-friendly moment of his career. A picked banjo pattern and Amidon’s vocal melody is at the center of “How Come That Blood,” picking up in some ways where his appearance on Nico Muhly’s Mothertongue (2008) left off; but neither the repetitive picking nor Amidon’s muted voice hits first. Instead, it’s the stabbing bass, the strings swooping inward for only a few seconds at a time, the bleeping synthesizer, and the loping percussion that control the song. In essence, Amidon’s core performance is merely a vehicle for the surrounding ornamentation, and it works surprisingly well. It sets up the tension between the often gentle voice and its malevolent surroundings, and this, his third collection of re-arranged traditionals, oscillates between the sweet and the almost apocalyptic, often to great success.

Amidon’s collaborators play a major role in this, from Nico Muhly and Valgeir Sigurðsson to vocalists Shahzad Ismaily and Beth Orton: the ensemble renders these songs far more compelling than Amidon’s interpretations alone would have been. More often than not, the duos—Amidon and Orton or Amidon and Ismaily—sing in unison, but the duets, especially “I See the Sign,” sound far more unhinged and unstable because of Ismaily’s contributions and the slight stereo pans that further destabilize the arrangements. When Orton appears on “You Better Mind,” she gives Amidon’s performance a religious fervor. On “Johanna the Row-Di,” it’s the increasingly out of phase, misplaced harmonies that prove the song’s greatest asset.

Yet this ensemble can pull off deliberate gorgeousness just as well. “Pretty Fair Damsel” takes an arrangement from the Sigur Rós playbook, all trebly strings, horns and bells building towards an utterly non-threatening crescendo—yet Amidon’s voice grounds them like Jónsi’s never would, and the lack of vocal theatrics is far more compelling than what little I remember of Takk… (2005) and Með Suð í Eyrum Við Spilum Endalaust (2008). There’s also “Climbing High Mountains” and “Relief,” which together serve as the album’s penultimate track. As the arrangement gets increasingly busy and the arbitrary track switch happens, Amidon goes into R. Kelly’s “Relief” (off of the never actually released Twelve Play: Fourth Quarter), which he and Orton deliver with such conviction that it’s not at all incongruous with the material that surrounds it. While this does seem like a bit of Will Oldham-biting—Oldham covered “The World’s Greatest” on Ask Forgiveness—and in performance Amidon presents it far less sincerely than he does in its recorded form, it still transcends all the obnoxious trappings of semi-ironic covers.

Of the material Bedroom Community has released, Amidon’s is among the most accessible and immediate, and arguably the least rooted in contemporary classical or experimental music. However, because it comes from a group of people working so often within those realms anchored around a singer-performer, it’s imbued with their strengths far more than the traits that threaten to derail their music, and Amidon uses them and his own talents as an interpreter and rewriter to blur the lines, precisely, where the public domain and Kells begins. Perhaps the real revelation is in the fact that he manages to do this without pissing me off.