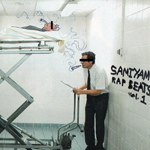 Samiyam’s lineage is blatantly obvious upon first listen, so I won’t spill much ink over Dilla comparisons, or place him in context with the million and one other Dilla-ites who have flocked to LA on some sort of pilgrimage to join in an indie producer movement that has bred results both nauseatingly derivative and genuinely enticing.

What does warrant mentioning is that Samiyam is superior to most of those other LA beatmakers, due in part to his markedly more variable production style. Rap Beats observes Samiyam as an ADD-riddled toddler treating his record collection like a box of new crayons, snatching a brief sequence of strings and toying with it for all of 60 seconds, then discarding it for a menacing organ or amiable horns. It’s the right and logical approach for his repetitive compositions, which would surely grow tedious if stretched to any great length. Rap Beats is, at its core, more of an exhibition of talent than anything resembling a cohesive statement, which I would surmise is its exact purpose. That the album never strays from a singular purpose—laying out prowess as focused on variety as it is quality—makes it a pretty easy pill to swallow.

Samiyam’s frantic pace, on the whole, yields some solidly interesting chunks and the collection impresses more than falters: the playful interplay between keys and an acoustic on “Rooftop” delights and “Sideways” performs better than the sum of its parts as Sam stretches a harp and sloppy cymbals to favorable effect; even the lesser tracks merely border on bleak, never veering into egregious cliché.

But what truly anchors the album is its handful of direly urgent gems. “Super Chronzio Bros. 2” is Infamous-era (1995) Havoc filtered through bad trip brutality and NES murder victims. This 8-bit bullshit has been peddled to death by a laundry list of would-be Warp signees, but Samiyam avoids the novelty, the nostalgia-dependent approach that often renders his peers’ work so lifeless, spacing warped blips within a fleshed-out structure of sound rather than sampling Castlevania and throwing some drums underneath it. This monster is the $400 sandwich of your dreams (or nightmares, depending), stacked to the sky with burbling percussion, inebriated clicks, and chrome-plated handclaps beneath layers of sinister hiss and morose, manipulated conversations. Samiyam is setting fire to toxins, evaporation circulating them throughout the uncomfortably small room he’s constructed. The slightly lesser closer “Untitled” pushes, drunk, an organ down a flight of stairs and watches it transform into an equally sinister accordion saved by Kevlar-piercing snares and maniacal undertones.

Hanging these two standouts next to each other, it’s still a bit unclear as to what Samiyam’s greatest asset is, exactly. “Super Chronzio Bros. 2” drips of judiciousness boasting labored concision, but the album’s final track revels in simplicity, smacking of guttural veracity. Then, upon examining the remaining beats here, it becomes apparent that Sam may still be figuring out such quandaries for himself, occasionally misstepping to varying degrees throughout—MIDI mistakes (the vapid “One love”) and the occasional poor sample choice (the lethargic “Wrap up”) mar an otherwise intriguing glut.

On that inconsistent front, Samiyam’s enticing entry mostly succeeds in circulating a buzz, acting as a sandbox in which he gosh-durn toys with a whole slew of sounds and brandishes his considerable skills. If Samiyam’s debut foray into beatmaking serves as the proverbial springboard from which he launches more nuanced, cohesive efforts, he could continue to stand out amongst the crowded LA hip-hop scene for some time to come.