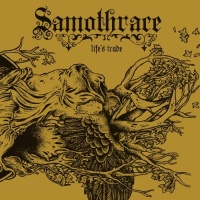 One listens to Samothrace and imagines the city of Lawrence, Kansas rendered post-apocalyptic: immutable dusky snow scattering like static on a broken television, fenceposts stuck jagged out of the dirt. I suppose there’s the same spread of shopping malls and sports bars and community centers as most other urban centers, but, like I said, Samothrace seems to erase this, the city then a festering wound stuck up out of the brittle, flat farmland with this band and this music something like leeches at once living on that split flesh while suturing the mistake shut.

I’m getting carried away. But this is melodramatic music, with a post-rock sense of theater and doom metal’s swollen ambience. Besides, locale can be important to a young band (why else would we listen to We Are Scientists?), and the music of Samothrace truly seems wrenched from that flat vista. The predominant unifying factor, after all, of the four pieces on Life’s Trade is a strangely Midwestern affection for melody. On “Cacophony” the band evokes decrepit, failed crop-shares with shuddering, windswept gloom, which is all to be expected on a doom metal affair—but inserts within this barren place warm guitar licks like bonfires against the cold and lonely synth lines like baying wolves. Those lupine synths feel, strangely, familiar. Home-y. It’s a moving sentiment, edging into outright sentimentality, to create a sense of home within this murky music, but the gamble pays off. This is imminently listenable, immediately likeable music to hate yourself and everything else to.

There’s a second component to Life’s Trade worth mentioning, aside from the general excellence of the compositions and instrumentation. I’m talking about the production. The general MO on such efforts is “sound loud,” but Samothrace sounds worn. The interlocutor between the almost subconsciously rendered melodies and the ice age chill of their setting is a sloppy Crazy Horse sense of stomp and fuzz, a production aesthetic with an earned sense of forgiveness, if that makes sense. It may not, but it will: The end of “Awkward Hearts,” for example, after eight minutes of baleful (and unchanging) riff-work, ruptures into half-time and finally a dust-worn shitstorm of a guitar solo, nothing psychedelic or particularly tuneful but instead worn snare stabs and loping, twirling guitar melancholia.

Woven through the curious curlicues of melody, this whiskey-piss production gives Life’s Trade its workmanlike sense of distinction. Here’s a press quote nobody wants to read: “Finally, the doom metal Kings of Leon,” but it’s true—assuming that we mean the old Kings of Leon, the weird and genuinely inebriated young men that sounded spawned fully formed from the fever dreams of Rolling Stone magazine, before the band turned into the scarf-wearer’s Bon Jovi. Point, I suppose, being: Samothrace have released an assured debut, but its refinement is a dangerous proposition. Here’s hoping they cut dirtier and drier still on further work; the results could be outright tornadic.