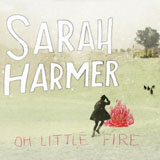 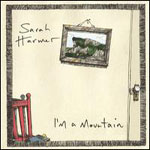 I’m sure there are many reasons that I have a hard time getting through I’m a Mountain without biting back a few tears, but here are the top three: 1) I love Sarah Harmer;  2) I love country and bluegrass; 3) I’ve been living in Japan for the past year and a half, and first listened to this over the holidays. When Harmer sings “There’s a bed made up upstairs / if you get tired,” it hits me doubly hard. Not only is “Goin’ Out” a gorgeous song that makes me think of home, but it reminds me of how wonderful it is to climb into a freshly-made bed, and that I don’t have one.  (Somehow, “There’s a futon in the closet / lay it out” doesn’t hold the same sense of warmth for me...)

Sentimental first reactions aside, I'm a Mountain may be Harmer’s best effort yet. It's her fourth solo album, following 1999's Songs for Clem, an album of covers of her father’s (Clem, naturally) favourite songs that was originally intended as a gift, 2000's critically acclaimed You Were Here and 2004's Juno Award winning All of Our Names. For those of us that thought Names was a step in the wrong direction, Mountain features a bunch of older material like Weeping Tile-era tracks “Goin’ Out” and "I'm a Mountain" (originally slated for their "lost" record, The Great Black Night, from which You Were Here took some of its best), as well as two previously unrecorded live favourites, “Oleander” and “The Ring.”  There are also a few covers: former Weeping Tile bandmate Luther Wright’s “Luther’s Got the Blues,” Dolly Parton’s “Will He Be Waiting For Me?” and folk duo Kate Fenner and Chris Brown’s jovial “Salamandre.”

I’m a Mountain, released on the heels of some politically-inspired touring (which "...involved Sarah and some of her best musical mates hiking the [Niagara] escarpment and making music along the way"), is a feast of country and bluegrass that sounds more like Songs for Clem than any other Sarah Harmer record. Unlike All of Our Names' remote and lacklustre production, I’m a Mountain shines the whole way through. While many of the songs were inspired by old-timey country, the album’s freshness and vitality prove that it’s not only quaint to revisit this genre, but also worthwhile. For instance, Harmer is a brilliant interpreter of Parton’s “Will He Be Waiting For Me?” and, in my humble opinion, improves on it on her own “I Am Aglow,” the record's first single. The tone of this song --- upbeat acoustic fingerpicking and lyrical candor; its cheerfulness undercut by the intimation of doubt --- is reminiscent of You Were Here’s gorgeous “Uniform Grey” (incidentally, my favourite song on that album). It, like most of Mountain, expands on the soft, beautifully sung folk that Names boldly (and unfortunately) kept to a few poorly produced highlights.

She doesn't make the same mistake again, and that probably has a lot to do with Mountain being recorded in a Toronto studio (like Here) instead of in her home studio (like Names). The warm, clean production of I’m a Mountain is a perfect match for these songs, whose dominant themes are reawakening and renewal.  The album abounds with imagery about waiting out the winter in anticipation of something brighter. In “The Ring,” Harmer praises a friend’s ability to cope with her in a dark mood by comparing the mood to nature’s changeability: “We sat it out like some passing bad weather.”  “I’m a Mountain,” in which Harmer discovers a personal strength in a surprising place --- the shopping mall --- spells it out a bit more clearly: “You have to choose if you will die or g-row.”

Then there’s “The Phoenix”; yeah, it's about rising from the ash and all that, but Harmer makes it fun and convincing with her charming up-tempo meditation: “Who was that phoenix anyway / Just some bird who flew away / And flies still.”  “Oleander” provides the most potent symbol of survival and reawakening: “Oleander, I think you’re better / I think you made it through another winter.”  Canadians, especially where I’m from, pride themselves on their acquaintance with cold and their ability to endure it.  This song embodies the reward that is spring for those who can last the winter, and Harmer knows about this; you can hear the snow melting in her voice.  That baritone floating below Harmer belongs to her father, Clem (just in case you thought the song couldn’t get any more beautiful), who also backs her on "Goin' Out."

Harmer says I’m a Mountain was “made for everyone, everywhere.”  Its country influences lend it a sincerity and lack of cynicism that is rare and refreshing, and Harmer has a quirky sense of humour about it, too, including a french children's song about a "magical amphibian" that reaches out to a whole 'nother demographic. As versatile and accessible a musician as she is, however, it's her vocals that once again push Mountain over the top. Harmer has finally grown into a voice and style that suit her perfectly, picking up from the warm folk of her other Great album, You Were Here, and wholeheartedly expanding on it instead of revisiting the awkward rock moments (even more odd considering her Weeping Tile past) that littered Names. This isn't so much a new direction for Harmer as a proper retreading of everything that made Clem and her "real" debut worth hanging almost six years and one hell of a disappointing follow-up on. It brings one of Canada's finest singer-songwriters out the other side of a half-decade long identity crisis with the sort of record we knew--or at least hoped--she still had in her.