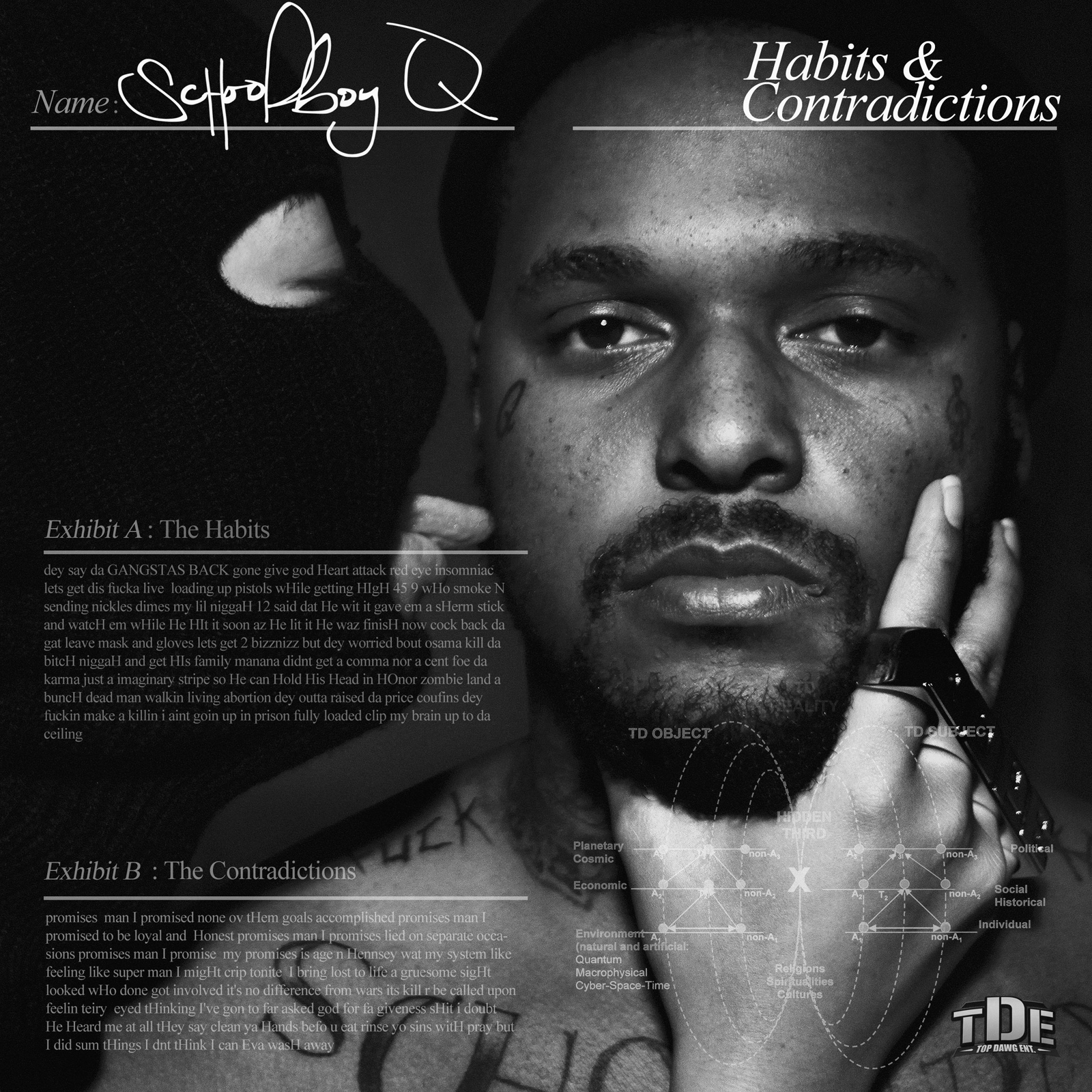 Patios, pistachios, Portishead, and “my pursuit of happiness.” With this second release from LA’s hedonistic and occasionally ham-fisted rapper, ScHoolboy Q is rampantly chasing down the latter. As in previous full-length Setbacks (2011), there is a signature enthusiasm that blusters through this mixtape/LP hybrid, like a magnificent exhale of smoke as grating and grainy as it is intoxicating. Or: as mesmerizing as it is mightily skunked with whiffs of frankly, shockingly masterful bullshit. And, to nothing but its benefit, Habits & Contradictions is a beautifully, beautifully, bullshitty piece of work.

Despite Q’s driving zeal all borderline uncool in its loose-lipped “fuckity, fuck, fuck” verbiage, he raps at the sluggish pace of someone slow-burning away the dog days—maybe it’s a brisk canter at its most spritely? ScHoolboy Q won’t be hurried along, I mean, made to scrutinize or compromise, and as such, nothing about Habits & Contradictions is strictly nailed down or conveys at any point there’s pressure for anything to be nailed down. CMG’s Sr. Wiz Khalifa Correspondent, Colin McGowan, described Q: “Like Wiz Khalifa if Wiz were less about champagne and airplanes and more about rough sex and 40s.” In other words, Habits & Contradictions has an unfocused focus. It’s free to drift, thematically and specifically into shrugging non-sequiturs; it wields few dire moments (despite the opening track’s weighted notes of arm-wrestling virtue and vices with the ponderous noodling of a western guitar); it carries no crosses bulkier than you could shoulder; it shines no harsh lights. If anything, it’d look at you like you’re an asshole if you walked in and hit the switch.

Still, Habits & Contradictions is a pleasurable listen with head-scratchingly pretty samplings and lyrics more or less liberated from value care of Q’s devotion to “weed and brews” and the delirious enjoyment of something so simple as saying “fuck” a lot. I mean: a lot, and very pointedly. It is with a spluttering joy in that particular self-indulgence that Q pronounces, “Uhhh, muthafucka’, muthafucka’ yeah / Fuckin’ is my favorite word, reason why I’m fuckin’ her,” accompanied by an equally puerile leer of “Up in ya braaaaaa” on the falsetto-ish chorus for “There He Go.” Which is rapped over, of all things, the tender piano palpitations of Menomena’s “Wet and Rusting.”

A reservoir of iniquity, salaciously effective pick-up lines, extraordinary negligence, and just…fucking awful advice (all the drunk driving, for instance), Q’s lyrics really hone in on and own the “simple pleasures” sweet spot. He emerges as a Norman Rockwell scamp-figure of hip-hop’s unabashedly carefree, fritterin’ youth—think, like, A$AP Rocky’s slightly less cool cousin? And, in a track that reads like a menu or manifesto for ardent substance abuse (with the added delight of breaks-squealing onomatopoeias: RRrr!), “Hands on the Wheel” allows related personalities room to play off one another. With Q’s hardheaded “fuck“s and all-capsed “TOO DAMN HIGH” drawling out before A$AP’s double-time rapping about everything that goes into a haphazard blend they’ve whimsically named “Pikachu,” the song is easily the best on the album, doing the best job of underscoring how Q may not be the most nimble or cogent rapper, but how that’s what winds up being his most impactful aspect.

Because: it honestly isn’t noteworthy in itself that the lyrics are often of self-interest, then of complete egoism. The pleasure derived from them doesn’t have much to do with linguistic specificity. He’s Jeezy-like in that way (though un-Jeezy-like in a lot of other ways); he brandishes a Black Flag sort of rap. He’s rapping about pussy and getting high in the same way Black Flag made music about depression, and he isn’t bothered with the poetics. “You get it. Here’s a verse that sounds like punching.”

If anything perseveres, it is his unapologetic way of grabbing up whatever he feels like. “You got some pretty legs ‘n shit. You should fuck with me.” To blatantly quote Colin, again: “He’s the dude who hits on girls at parties by being balls-out confident enough to be like ‘we’re sleeping together.’ And you’re like, ‘I mean, I have reservations, but you’re still not wrong.’” He basically even gets away with fucking other guys’ girlfriends completely unscathed because they wind up being fans of his. Oily sidesteps and the brushing off of narrow escapes saturate the tracks as they mull around with their own sumptuous brand of aimlessness. Q has a gun, but he doesn’t wind up having to use it; he has muscle, but even while, on “Raymond 1969,” “murder murder murder kill” blasts from the increasingly diabolical tones of Portishead’s lush, rupturing distortion, what isn’t conveyed in enunciation is conveyed when Q simply steps aside and lets Beth Gibbons’ vocals bare its teeth for him.

Habits & Contradictions is, then, engulfed in freedom: to use people and substances for pleasure with un-wincing consistency that gives his most juvenile sentiments a manly ring, articulated in such an insular way it weirdly enough comes off almost worldly. Insular, because much about what he’s pursuing is held in some realm of pure potential. For instance, while there is sex, it is often something at arms’ length. He watches someone undress, he retrospectively muses about a girl having “never been with a G” before, he sexts, and he sexts about sexting about that girl and that someone. These people are often just blurry imprints, “the girls with the heels / preferably the ones with the ass,” indistinctive but utterly guaranteed. The ease with which his rhythm relates those guarantees, it’s hard not to be just as drunk on that sense of possibility, which: is so fucking possible it reads as inevitable.

Curiously, it’s in “Blessed” (featuring 2011’s Top Dawg Entertainment breakout rapper Kendrick Lamar), which begins to pick at his past (in a way similar to Setbacks), that reinforces his narrow lyrical focus. While it has every potential to wield emotional weight and pathos for a rapper who normally avoids giving us that, what it mostly does is manage to eschew contradiction, and instead draw a straight, simple line from hardships—like living out of a backpack—to the way he raps unapologetically about pleasure. Q’s strongest when he doesn’t succumb to nostalgia or pensive pitfalls, but the lyrics in “Blessed” swing from affectingly specific images about uneven pockets (“I was hangin’ on them corners late / Pockets wasn’t straight, bitch”) to unexpectedly humble (“I know the world got more problems and it’s much bigger/ But I figured, I’d get some shit up off my chest“).

It’s with that kind of perspective and sincerity that Q seems to shake off dour imagery faster than it can get depressing. Like in “Sacrilegious,” where he confesses to keeping “homies on shuffle,” as soon as the lyrics tip towards heartache or some gesture for sympathy they recoil with a bout of optimism (“Don’t stress”), followed by Q resolutely fist-bumping himself (“Ones for the money, two for the bitches / Three to get ready cause I feel I finally did it”) or switching to someone else’s woes as a means to appreciate what he has. And for the woeful he offers condolences, weed, whatever he’s got, plus a dose of probably more bad advice, but with hopefulness. Honestly, for a guy who doesn’t keep friends, he is really willing to be a heck of a pal to everyone else. Which is evident in just how comfortable he’s made featured rappers like Lamar.

Habits & Contradictions is a compellingly free album, if freedom is the assurance and the power to subject each person to one’s own whims, will, and wishes. And to just absolutely know he’ll get what he wants. He “might crip tonight”; he “might fuck tonight”; the world is ScHoolboy Q’s oyster. Just as long as what it has to offer him doesn’t, y’know, get its pussy on his car seat. He explicitly does not want that.