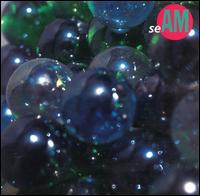 The Problem With Me

Man, remember when we used to like indie rock? I’m not talking about the retro-style of pop pornographers or the pet sounds aping of elephants. That stuff is all well and good, but I’m talking about straight-up indie rock, severing ties to the past, creating a region-free guitars/bass/drum sound in the anti-culture of the 90s. Well, maybe you don’t remember ever liking that Wonder bread, man, but I do, I do.

Seam epitomized that suburban scrawl, the music I still love with that whitest part of my heart. Funnily enough, Seam leader Sooyoung Park is Asian without the “Cauc,” but never mind that, this is White Boy Music, dude. Imagine, if you will, the deceptive reservation and ponderous pop of Bedhead given a genteel kick in the ass by the rocking immediacy and proto-emo of early Sunny Day Real Estate. Now imagine something not quite like that, and you have The Problem With Me by Seam. Notes: The Problem With Me was released on Touch and Go, the home of Bedhead reissues, and produced by Brad Wood, mini-Albini landlord of early SDRE rawk.

The album cover, a glistening caviar stash of aquamarine glass, and the back cover showing a solitary blue globe suggest that “The Problem With” Sooyoung Park is that he’s lost most of his marbles. Not to a raging noise-rock form of insanity, but to a subversive slew of neuroses, intimated through the lyrics and music with all the affable directness of an Alvy Singer suffering under a mild case of poetic angst.

The Bedhead comparison feels most validated on the tight six minutes of “Road to Madrid,” on which Chicago demigod John McEntire steps in for Bob Rising on drums and Bundy Brown takes the place of Craig White on guitar. The chiming strings of Bundy and Sooyoung intertwine as John’s drums and sexy Lexi Mitchell’s bass ratchet up the tension towards eventual release. Park’s surreal mutterings get bent with Galaxie 500 reverb on the final verse: “I’ve been taken away/ I’ve been taken away/ By a shark-skinned man with a raccoon tan/ His skin peeling back, as we drove by/ Into the dust of a city that was calling us… ‘Hello.’” And then just wait until you hear McEntire let loose on that drum set, man. Back to the original line-up for 3 ½ minutes of “Stage 2000,” the perfect track to follow “Road to Madrid,” Sooyoung once again getting the Kramer vocal treatment on the booming amplifier chorus of “Take me over in a plane/ Take me someplace I’ve never been to/ Take me over in a train/ Show me something I haven’t seen.”

Nothing you’ve heard has really prepared you for “Sweet Pea,” a somehow melodic melee of semi-automatic drums and shrapnel cymbals, electric guitar squalls, an insistent bass anchor, and Bundy making the E-bow weep. Park’s vocals rise above the warfare, “I turn red, I turn back in defeat/ Take an arrowhead through my neck/ And it’s time to turn away/ To where I walk, where I stand/ Where it cuts, where it binds/ Where it stings, where I hide,” and then softly, “Don’t tell me you know, I know. Don’t tell me you care, I know.”

“Sweet Pea” and “Dust and Turpentine” form the peak of the album’s emotional intensity. The latter’s a streaked window melancholy akin to the Pumpkins’ “Mayonnaise” before it arrives upon a sort of bridge, a night utterance evoking an air as ancient as Old Testament: “There’s something I don’t like about it/ It’s not dust, and it’s not turpentine/ It’s a curtain wall from you/ It tells me what to do/ Tells me what to do/ Don’t you tell me what to do.” The music bursts into that big bang of anthem rock pathos that the entire Deep Elm roster keeps trying to capture as Park repeats, “Don’t tell me what to do.”

If that sounds like a bit much, it probably would be, except that a point of inspiration in the album’s flawless sequencing calls for “Dust and Turpentine” to be followed by the downright poppy arrangement of “Something’s Burning.” The song’s structure impresses, consisting of three bouncy verses with three musically different passages after each, all parts equally good and somehow coming together seamlessly in four minutes. “The Wild Cat” portrays a transition from timidity to aggressive assertion in archetypal fashion: “Someone told me to speak/ I shut my mouth, and I looked around/ For someone else to gloat/ For someone to make a sound… I’ve got nothing to hide from you/ I’ve got nothing to lose/ I’ve got nothing for you/ I’ve got nothing for you.”

While there’s nothing on The Problem With Me that you could straight-facedly call experimental, album closer “Autopilot” is perhaps the closest thing. Lexi’s bass line serves as the melody over a modulated guitar loop that almost sounds like keys, and Sooyoung half-whispers, “I feel old here/ I’m turning hard inside/ And my lips sound strange/ Or is it just that I’ve gone insane?” A downpour of distortion rustles through. “I feel old here/ Like a watch that ticks/ My throat’s shrinking/ Somebody’s laughing.” The distortion passes, and a gently cascading guitar joins the loop and bass: “And the song sounds wrong/ Or is it just my ears playing tricks on me?/ And these heads look strange/ And they’re out of time/ I’d better go outside/ Just walk away.”

The Problem With Me is the kind of craziness that’s not crazy at all. With focused song craft and effective instrumentation, it expresses frustration, self-doubt, confusion, hurt and a host of other feelings that almost any of us can relate to. But it’s steeped in a sense of hope and universality, not the whiny, trust-funded despair of that local band sporting ironic trucker hats and pastel polo shirts. This album keeps it real, keeps it frank, smart, and sharply affecting. Man, that’s the indie rock I love.