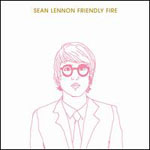 Tweet
If it’s considered fair to spend any amount of time talking about who Sean Lennon’s dad was, then it’s equally fair to save time for his mom. Eight years after his debut album for the now defunct Capitol offshoot Grand Royal, Lennon is still best characterized by the same emphasis on pop cultural awareness exhibited by Yoko Ono, a responsiveness to contemporary music trends and issues that tends to date music while poking at significance. Into the Sun (1998) parked its hopscotch mentality out in left field, abstaining from stylistic, unifying threads to allow its heap of then-hip guest appearances to define it from song to song, moment to moment, and was thus of the kind of late-nineties, cross-culturalism toyed with by Beck, not to mention former Grand Royal owners the Beastie Boys. Like his mom’s debut album, Sean Lennon entered stage left with name recognition and an attempt to capture the sounds of his time.

At first listen, Friendly Fire may seem the pendulum swinging back the other way. Bringing Jon Brion on board not only packs onto easy, accessible song structures the lush accompaniment and warm production for which Brion is known, but also unifies the album into a character mostly alien to Into the Sun. Gone is the broad approach to musical accessory, the sponge into which is soaked the contributions, whatever they may be, of Lennon’s friends. Instead Friendly Fire demonstrates an exacting, precise musicality; strings and keyboards segue seamlessly alongside Lennon’s wafer-thin voice and undemanding arrangements, perfectly accentuating without overshadowing. Brion plays the role to which he was accustomed for Fiona Apple, and Lennon’s songs are elevated well beyond their fundamental quality. Friendly Fire sounds like it could be the Elliott Smith album Brion and Smith were purportedly supposed to make.

But as the album progresses kindly from nice, mid-tempo melody to nice, mid-tempo melody, it becomes clearer and clearer that Lennon’s stylistic change is not one from reflective to non-reflective songwriter; simply, it’s the temper of the times that have changed. Accordingly, Lennon’s lyrics throughout Friendly Fire paint a portrait of fatalism, depression and the absurdity of death’s omnipresence in current day America. “Dead Meat” opens the album with the question “Don’t you know you’re dead meat? / You just messed with the wrong team / Better not try to fall asleep.” In Yorkeian fashion, Lennon’s threats resonate with a culture’s dread; the singer imagines his own destruction by simulating it elsewhere, and the present day context hardly need be pointed out here. Lennon soon admits on “Wait For Me,” only two songs into the experience of Friendly Fire, that “everyone was born to die,” a leaden pronouncement for what almost amounts to the album’s first impression.

First (and excellent) single “Parachute” conflates love with the defeatist qualities of America’s ever-present terror. “Love is like an airplane / You jump and then you pray / The lucky ones remain / in the clouds for days.” The words punch like ubiquitous, sorrowful video footage before Lennon consigns himself to the album’s defining thought: “If I have to die tonight / I’d rather be with you / Cut the parachute […] we had some fun before we hit the ground.” The reckoning to which Lennon exposes his listener is less the shouldering of responsibility pontificated upon by the nation’s politicians, but a feeling of helplessness in the face of forces beyond his control. By the time he begins his second verse with “Love is like a hurricane,” Friendly Fire, with its imagery of airplanes crashing and natural disasters destroying, has set itself up as a requiem for the new American experience. It’s a fascination with the apocalyptic that first revealed its specter during the Cold War context of Sean Lennon’s parents and has returned, in recent years, to post-9/11 America. So, Lennon has not actually eschewed his reflexive ways; Friendly Fire is a lament that would have been out of place amid the optimism of Into the Sun’s 1998 but, today, mimics the defeatism first popularized by his parents’ culture in considering the possibility of unpredictable and sudden destruction.

The title is apt -- a sometimes anti-war activist, Lennon and friends must sometimes feel a greater threat from precedents set at home than from the faceless threat of the 21st Century’s New Enemy. In a divided country, Sean Lennon has effectively and darkly captured the tenor of the alienated half. On the title track Lennon sums up with “You launched the insult / with the first cannonball,” and in doing so contrasts the album’s professional prettiness with the feeling of being one of the unnamed casualties.

Friendly Fire isn’t angry enough to be a protest record, and therein also lies its greatest fault. Lennon doesn’t move from his position of isolation through to catharsis, or rational engagement, or even denial, but simply submits his listener to the sound of defeat. Friendly Fire could have been an inspiring album, more than just a snapshot of the times for which it was written, but doesn’t offer hope or solutions. The melodies and production are top-notch, even if, lyrically, the album’s motifs barely move from sullen dismay to cheery dismay (see the handclaps on “Headlights” and the occasional sweeping, major chord of “Would I Be the One”). Sean Lennon is his own writer, and to ask him for “Imagine” would be as facile as it would be unfair, but the thought doesn’t make this accurate, accomplished, impressive but certainly depressing sophomore album any more fun to listen to. If it takes eight more years for Lennon to record his third album, let’s hope both the gravity of the times and his ability as a songwriter to respond to them take a more positive direction.