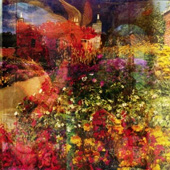 I think I can boil down to a thought why I’m not impressed with Sean McCann’s The Capital while thinking that Tim Hecker’s Ravedeath, 1972 is probably the album of the year: both sound like they are attempting to distill the aesthetics of modern ambient music into concise, definitive summaries, but only one of them does so with patterning, pacing, and patience, while the other resorts to the cliché touchstones of spaced out, atmospheric music. Bubbling water, tinkling psychedelica, and washing noises abound, but they don’t abound in any particular direction. One imagines effect pedals with knobs labeled “Jet Drive” and “Epic Planet” were employed, but beneath there are few actual arrangements. Ideas like “Unfolding Angels” and “Star Charge” are sketched out, but don’t grow the way a band like Emeralds allow their ideas to gestate. And so The Capital is occasionally very nice sounding, but almost accidentally. Its infrequent quality does not seem by design.

Stylistically, McCann sounds more invested in the heavy uplift of cascading melodies than the doom and drone and creeping dread so characteristic of the best of recent ambient. Yellow Swans, Keith Fullerton Whitman, Mountain, and Tim Hecker evoke in a way that seems believable. They balance a diversity of sounds that ultimately coheres into a mood that is at once bracing and, seemingly, relevant in a modern way. The Capital, on the other hand, with its choir-like “Star Charge” and the nine-minute quasi-folk ditty of “This Was Nearly Mine,” can sound saccharine, nostalgic, and neutered. This latter song is the greatest offender, plowing away at McCann’s one note, far beyond the point of novelty until the listener is desensitized. Considering the genre’s origins, and Eno’s commentary on Muzak, I can think of no greater fault to assign an ambient artist than to suggest that their music actually becomes white noise, an appeasing placeholder: anti-music.

“Swoon” is the album’s best track, because it achieves that rare balance of haunted sound and spare, enduring arrangement, but seems to only be able to do so because it comes last, in that slot reserved so frequently for an album’s most experimental song. It blends both traditional ambient elements and the industrial moan of compromised sounds, and recalls, at times, the incredible “Hatred of Music” selections from Tim Hecker’s recent opus. The songs go in unexpected directions, not bound by the glacial immobility of unimaginative ambient. Shame, then, that this track is a departure from the rest of the album.

Maybe it’s unfair to compare The Capital to the best of its genre from the same year, but such is the lot for us fans of ambient music—there has simply been so much quality in the last half-dozen years, so many albums that are not just interesting and accessible, but genre-defining enough so as to earn the label “Important,” that we are spoiled for choice. The Capital has a lot of merit, and some of its best moments, like “Swoon,” or the frequently lovely (though also flawed, and eventually sagging) opener “Aerial Sapphire Show,” could be included on 2011 mixes. But it feels like McCann is being outpaced by his peers. There are far more innovative excursions among the improvisers; far more careful constructions among the narrators. It must be an incredible time for the genre for something like this to fall short.