Other Records by Sexsmith and Kerr 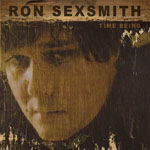 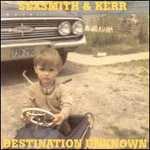 At the 1999 Fleadh Festival in Finsbury Park (London, England) I almost heard Ron Sexsmith for the first time. I read the program and felt the expatriate pull to support a fellow Canadian, but he was slotted for stage two and I was drawn to the bright lights of the main stage (which Elvis Costello, The Pretenders and Van Morrison graced, so you can’t blame me). I managed finally to see Sexsmith the next fall in Saskatoon at a slightly more intimate venue (it being Saskatoon and all); I was struck by his baby-face, his humility, and the immensity of his talent.

Four albums, an enviable amount of critical acclaim (via Elvis Costello, Paul McCartney, John Prine, etc.), and modest commercial success later, Sexsmith has released Destination Unknown, an album of duets with his longtime bandmate Don Kerr. He describes the record as “a collection of misfit songs sung by a couple of misfits,” as the bulk of the material came from his 2004 Retriever sessions but did not fit the arc of that album. Sexsmith eventually determined that one of the songs (“Counting on Time”) had an Everly Brothers feel, and thought it might work as a duet. He put Don Kerr, his “brother in song,” to work harmonizing, drumming and producing, and Destination Unknown was born.

The timing of this album's release, or at least the timing with which it's reached me, is perfect. It's autumn, the leaves are falling, the wind's blowing a little colder, the general mood is nostalgic; it's the perfect time to settle down with Ron and Don (any idea why they chose to go with "Sexsmith and Kerr"?), and reflect.

Upon what are we reflecting? The old stand-bys -- love, faith, loss, regret. But we’re celebrating, too; most of the songs on Destination Unknown explore basic conflicts -- the simultaneous desires to be at home and on the move (“I’ve Been Away”), to move forward and revisit the past (“Diana Sweets”: “Am I doomed to wander every back road of my mind for all eternity?”), and to grow up and remain a child (“Lemonade Stand” in which Sexsmith empathizes “for one who longs to find / the secret place to hide and hold back the tide from boyhood to man”). As usual, Sexsmith uses his voice exceptionally; these conflicts are communicated through the lyrics, but also through his delivery and phrasing. The way his voice lilts so longingly when he sings “And WHY?” on “Reacquainted” can weaken the knees.

Musically and lyrically, Destination Unknown is simple. It features no electronic instruments and the lyrics are as straightforward as Sexsmith gets. As the album was conceived of as a kind of throwback, however, this seems appropriate. There’s a bit of Everly Brothers here, a bit of McCartney, and, I think, a bit of Gershwin (on “Your Guess is as Good as Mine”), but for the most part, it sounds like nobody but an accompanied Ron Sexsmith. Don Kerr, whose harmonies are flawless (I actually thought Sexsmith was singing them himself at first), and whose mandolin work on the opening track “Listen” is understated and beautiful, complements Ron's anti-star-power perfectly.

If I have one complaint about Destination Unknown, it’s that a few songs exhibit some lazy (well, lazier…) lyricism. Sexsmith has set a precedent on previous albums for being a meticulous songwriter, capable of producing lyrics as poetic as Leonard Cohen and as playful as Irving Berlin. Although he’s saved by his talent for melody, tracks such as “Only Me” and “Tree-Lined Street” lack the intensity they might have achieved if the lyrics were stronger. “Tree-Lined Street” is such a simple, gorgeous song, but at points its lyrics falter: “So fine walking down my favourite street / you know the one with all the little buildings.”

Sexsmith is aware that some listeners don’t hear what he hears in his songs. In a 2003 interview for the Sydney Herald, he says "Some people say I write downer songs. And I'm always trying to defend the fact that I try to write hopeful songs.” Destination Unknown opens with “Listen,” where we're asked to open our eyes to this point: "miracles all around / you've only to follow the sound / can you hear it?" While Destination Unknown can be counted among Sexsmith's best songwriting work, it's too polite to force its way into the listener's heart without invitation.