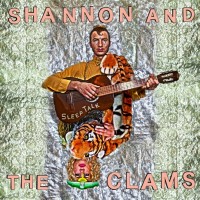 Shannon and the Clams

Like many of their peers from the San Francisco Bay Area, Oakland’s Shannon and the Clams—a trio consisting of bassist Shannon Shaw (also a Punkette currently playing with Hunx and his Punx), guitarist Cody Blanchard, and drummer Ian Amberson—play stripped-down garage rock, indebted to early-sixties pop arranging and early-seventies proto-punk. Sleep Talk is a remarkably strong entry into this now somewhat overcrowded genre, a set of songs that serves as a showcase for both Shaw as a performer and for her band as a group of collaborators; the trio writes simple, often lovelorn songs more complicated than they initially seem, and finds ways to create haunted space within those songs without coming across as contrived or annoying, something that eludes much of their competition.

A huge part of the record’s success comes from the group’s use of reverb. Despite the fact that the trio drenches everything in it and does so to an even greater degree in a live setting, and contrary to the fact that the echoing handclaps that begin the album sound almost trite at this point, reverb often enables Blanchard and Amberson to bolster Shaw’s massive, often distorted alto to great effect, making it unclear where one singer ends and another begins. It proves crucial when it animates the hooks at the center of many of these songs, and provides subtle harmonic support for her vocal leads, adding turns to songs like “Louie” and “You Will Always Bring Me Flowers” despite their deliberate repetition.

However, what truly sets the trio apart is their ability to make spectral, eerie songs without devolving into now-cliché Twin Peaks-isms. David Lynch’s most successful stab into mainstream society has very much become a reference point in the last several years, yielding countless songs about Audrey Horne, Dale Cooper-themed show posters, and someone’s recording project being called Pwin Teaks for some reason. Shaw instead hints at danger as early as album opener “Baby Don’t Do It,” where repeated mentions of a machete are the first thing one notices beyond its striking chorus melody, and a demented punk workout like “Toxic Revenge” deliberately breaks up the album’s flow by making room for cacophony. The album’s title track pulls this off better than anything else, though; it reveals one of those aforementioned moments of vocal trickery as its harmonies flip the song’s dreamy verses into nightmares in an instant. It sounds like the distorted falsettos that held together Wavves’ early songs, but performed by people who can use them as a means to an end rather than a sole focal point, and the effect is alarming.

Like most of the records coming from the west coast at all like this one, Sleep Talk burns through a dozen hook-heavy, short-ish songs in well under forty minutes. But unlike many of them, it’s got a fair amount going on underneath its scuffed surface and beyond its twee leanings, these songs never willing to break down totally at the expanse of pop constructs and instead hiding their darker elements within immediately consumable packages. And while that’s been done, too, Shannon and the Clams are very good at it, making this a sugar-coated poison pill, but one more than a little worth trying.