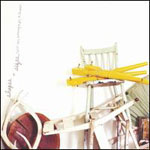 Candle to Your Eyes

Shapes and Sizes seem increasingly obsessed with wound imagery. This first became apparent with their last album, Split Lips, Winning Hips, a Shiner (2007): not the stuff of maudlin high school poetry, but less dire afflictions—cuts, scrapes, bruises—the varieties of injury that serve as an irritant more than anything. It’s a considerably more honest portrait of torment than what we see in most music; after all, we don’t have emotional breakdowns as regularly as morning coffee, and grieving feels more like an upset stomach than a deep gash across the heart. To mirror this shift in focus, Shapes and Sizes’ music has metamorphosed from ramshackle pop into something considerably more alienating and sparse: most sounds here are like tiny aural pin pricks and Caila Thompson-Hannant, who has, on other efforts, played the role of wailing heroine or cooing temptress, instead channels her considerable vocal talents into increasingly downtrodden meditations that infrequently rise above a saddened mumble. Split Lips was pained, but a track like “Alone/Alive” celebrated that unease, romping around its vacant apartment in defiance, deciding to—fuck it—finish that bottle of whiskey in the cabinet.

Candle is the joyless morning after, when exuberance can no longer veil one’s deeper anguish. (There’s no use in yelling when you’re just talking to yourself anyway, especially when some of the shit you’re saying is ridiculous.) That said, the writing on Candle is sometimes outright distressing: Thompson-Hannant likens her (ex?) lover’s penis to a fox and the album’s title is a clunky metaphor for the myopic nature of love. It could be argued that this intermittently embarrassing lyricism actually works in the band’s favor, augmenting the already uncomfortable tone established by the instrumentation; Thompson-Hannant’s garbling about someone’s loins is at times startlingly affecting, as if she’s anxiously flipping through a high school diary and forcing herself to repeat aloud some of the dreck her former self had once written in complete sincerity, purging melodramatic demons to better focus her present feelings. Then again, I’m sure such cringe-inducing lines weren’t composed for the purpose of dredging up such sentiment—poor writing isn’t an artistic strategy so much as a deficiency—but incidental success has its rewards, too.

I keep coming back to the term “uncomfortable” when discussing this album because that’s precisely the mood that pervades it. It’s not uncomfortable like Cursive’s angry divorce-rock on Domestica (2000) or wistful and broken like the Wrens’ Meadowlands (2003). It’s uncomfortable like going out with a friend who recently made an unsuccessful suicide attempt, the pain and worry buried beneath layers of poorly feigned attempts at idle chatter. Candle drags the listener through that muck; the arrangements are subdued, but almost never openly melancholy. On “The Hit Parade,” the percussion punctuates each of Thompson-Hannant’s low cries with ellipses, compelling her to continue, teasing out her agony until she flatly announces that she’s “excited / yeah, real excited” with disaffection so poignant it forms a stale dew on the sunless composition.

So why are praises due to an album that captures the feeling of being hungover at work two weeks after your significant other has moved out? Because it soothes us, too. “The Hit Parade” eventually pulls the shades back on its apartment window, realizing some plangent shred of hopefulness: “This one is going / To the number one spot”…and some nonsense about titans singing. Elsewhere, there are moments where a bit of melody or vocal flair will escape from beneath near-oppressive dourness—a timid surf-rock riff here, a propulsive bass line there, a yelp. By the time it’s burned out, Candle‘s success is that it never easily slips into an unendurable meditation on headaches and loneliness—it’s not merely documenting desolation, but actively struggling against it.