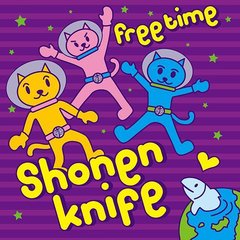 Shonen Knife has been a low-level presence in my life—started with late-night KROQ in the mid ’90s, rekindled by a Powerpuff Girls soundtrack, then kept alive by Wesley Willis and some stray MP3s this decade. It wasn’t until coming across Free Time that I learned their backstory: the band has been around in one form or another since 1981; they toured with Nirvana; they have been pumping out almost yearly albums, of which I have been totally unaware; there has been controversy about whether the last couple of those count as “real” Shonen records now that only one original member remains under the name.

That controversy seems much ado about nothing, at least to these untrained ears; Free Time sounds almost exactly like the Shonen Knife I remember. There’s no “Tortoise Brand Pot Scrubbing Cleaner” and no “Flying Jelly Attack,” but there is indeed a “Monster Jellyfish” that comes close to combining the two. Lead singer Naoko Yamano and a full backing vocal chant, “I was raised on jellyfish” (...the band?) over a surf-Lush bass line and an unassumingly complex guitar backbone that spends almost as much time on the fourth as the tonic. I can’t understand anything outside of periodic references to more jellyfish—three decades into their career and Shonen Knife can’t, or won’t, sing clearly—but the unassuming way in which words move between babbling opacity, broken English intelligibility, and what I assume is Japanese is endearing, not annoying. A lyric like “Cranberry / Strawberry / Brooberry / Brackberry” transforms “P.Y.O. (Pick Your Own)” from a bass-heavy plodder into something light and funny.

My personal highlight is “Economic Crisis,” five minutes of Bad Religion chord progressions and indecipherable Yamano screams. I’m sure she’s saying something funny and topical but you kind of have to fill in the blanks yourself. The quick pace, insistent drumming, and spastic guitars don’t bring to mind this decade’s recession per se, but one could imagine traders on the floor of the Tokyo stock exchange panicking, arms flailing, the day after Lehman Brothers collapsed. Or something similarly vibrant and potentially confusing.

Free Time is not perfect, of course. The twangy guitar and “Yanni / Yanni / Yanni / Roll cake” refrain on “Rock ‘n’ Roll Cake” are schmaltzy even coming out of this camp (even, perhaps especially, if Yamano isn’t actually saying “Yanni”); Shonen Knife can do a lot of things, but country music apparently isn’t one of them. Where some may revel in how they don’t fuck with the formula that’s persisted over their extensive career, others will reach for fan favorite Let’s Knife (1992) or save their money; that economic crisis Yamano maybe sings about is still happening, you know.

Many who read this review will be old or wise enough to draw their own parallels: to the Ramones’ proto-pop-punk, or, less explicitly, to the suddenly hot garage/DIY scene that Shonen Knife predated and will outlive. I’m happy to report that we can add at least one more to that list, care of the one completely understandable song on Free Time. “An Old Stationary Shop” tell the story of the titular fancy paper mom ‘n’ pop: “At the old stationery shop / Nobody knows how long it’s been there / At the old stationery shop / Memories of the good old days.” Yamano’s sweet crooning plays against a “Waterloo Sunset” tag and a high guitar jangle, providing the perfect corollary to a track about a brutal economy. In other words, a band fronted by a heavily accented, middle-aged Japanese woman has managed to channel The Kinks Are the Village Green Preservation Society (1968). Wesley Willis got it right: “The band played it on / The band got down / The crowd roared like a lion.” 2011 and yet another Shonen record couldn’t come soon enough.