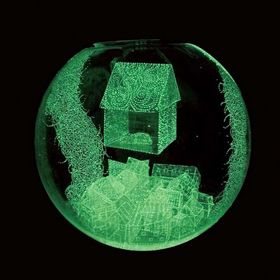 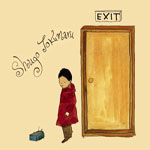 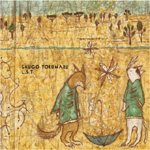 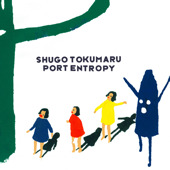 I’m never more awake than I am in the last few minutes before I go to sleep. That’s when my mind seems to race its fastest, when it draws itself through the needles eyes of tenuous connections, when the synapses fire with that electric hum and snap. Just before I let myself go under the surface where noise is teased apart into floating fractals that shiver and shine. In his stellar studio work thus far Shugo Tokumaru has largely aimed for that latter oneiric realm: the ethereal, the diffuse and the calm. Port Entropy, Shugo’s fifth LP (depending on how you reckon Fragment, his 2003 CD-R self-release), decisively occupies the realm of the waking: the nimble, the abstract, and the exciting.

After letting Deerhoof and a few others take a crack at remixing his single on the Rum Hee EP (2009), an artist as exacting as Tokumaru probably relishes the opportunity to re-inhabit his own little closed universe, where he pulls all the strings. Entropy strides boldly in a new direction, both more frenetic and more focused. It’s a big, relentlessly surging folk-pop song suite that may have just the right composition to net Shugo Tokumaru an audience somewhere near the size that he richly deserves. Perhaps an audience closer to the size that made it a Top 40 hit when he released it in Japan in April 2010 (it will drop in US record stores February 15). So why, despite embarrassingly effusive critical accolades, haven’t the American masses caught on? I have a theory.

Entirely too many people have been classifying Shugo Tokumaru as cute. I know this because I’ve been guilty of it myself in the past. And it’s an easy misnomer to apply, mainly because the motherfucker is adorable. Read this interview conducted by erstwhile Glow worm Aaron Newell, and try not to reach for the “like” button that we don’t have (CMG > Facebook). I mean, fuck, just look at Port Entropy‘s cover art. It appears to be a watercolor rendering of a tree—or possibly a giant Gumby doll—shouting a welcome to three schoolgirls, which startles a nearby blue aerosol can. It’s bizarrely endearing.

Even the music—sinewy as it actually is when you attend to it—lends itself to that adjective, but I’m going to stop using it, and I’d caution others against it as well. It’s lazy, it’s easy, and, more importantly, it is foolishly reductive in the case of a musician so accomplished and generally badass as Shugo Tokumaru. He’s always corralled the thousand elements of his bedroom orchestra so efficiently, with such precision, and with such coolly dazzling results, and we have, by in large, pat him on the head and been all “great job, guy.” And that’s straight bullshit.

He is now out to deny us that option. On Entropy, he seems to be especially in fighting trim. Some of these cuts are flat out muscular. Here’s Shugo firing hard out of the breaks on album single “Lahaha” or deep track “River Low” with the force of ballistic thrusts we haven’t heard before. Of course there’s also “Laminate,” harkening back to Night Piece (2004) somnolence, beginning with a rhythmic drun-drun-drun-drun-drun-drun-cooney ahhhheee, followed by a laughing beat that quickly becomes entangled in a lyrical bramble that, though I don’t speak Japanese, seem to positively bleed earnestness and urgency. It’s one of the most pensive and unswervingly beautiful songs he’s written—and “Beautiful Shugo Tokumaru Songs” is a pretty crowded field. Maybe that’s what we should substitute for “cute.” Beautiful.

Like most of his work, the ornateness of the arrangements makes me wish I could understand the diction that Shugo uses to complement his cacophony, since it’s a good bet that he crafts his lyrics as carefully as all the subtle bumps and flourishes that make up the songs. Even without this understanding though, the vocals ride the line between rhythmic and melodious so dexterously that they become another instrument and gain meaning in a different way.

To paraphrase Craig Eley’s review of Exit (2007), you can’t know what Tokumaru is saying (I suppose if you were Japanese you could), but his tone and cadence are so expressive that you can “feel” the outlines of meanings when you listen to his songs. And where Craig heard hope in the reissue of Exit, nearly all of Entropy, contrary to the implication of its title, is about a brand of aggressive exuberance. That’s why this record more readily throttles up its pop influences, though not neglecting the elements of folk and traditional Japanese music that have become Shugo’s hallmark. It’s why the guitars of “Laminate” spin and bounce in a way that makes it a perfect soundtrack to a muted game of Super Mario Galaxy 2. And it’s why album closer “Malerina” is, in it’s own delicate way, pure rock and roll.

Shugo sounds as though he’s pushed past the days when he indulged his impulse to demur in the face of critical attention, infamously inquiring whether we were sure we included the “right” Night Piece in 2004’s Year’s Best list. I’m sure he’s always wanted people to listen to his records, but it feels to me like he wants people to hear this one. We at CMG have been standard bearers for all things Tokumaru for more than six years now. It started with Newell, passed to Eley, most recently Dom advanced the flag, and now it falls to me to meagerly extol the virtues, not only of this record, but of this musician’s overall phenomenal worth as a pop artist. I have to say though, my job is way easier than any of those guys’ because Port Entropy is Shugo Tokumaru stating his own case like he never has before.