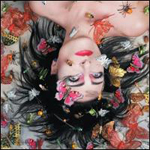 Siouxsie has, with the Banshees, recorded some of the most iconic punk songs of the last 30 years -- "Hong Kong Garden," "Christine," "Happy House," and "Peepshow," to name a few. She has developed a persona and sense of style which has informed everyone from Alison Goldfrapp to Marilyn Manson. She has, to this point, been a grande dame with a fantastic supporting cast, be it the Banshees, the Creatures, Morrissey, Basement Jaxx, or a full orchestra. On Mantaray, her first solo release, she finally stands alone.

Lead single "Into A Swan" is both a manifesto and a statement of intent. Her voice, a devilish Eartha Kitt cutting like a razor across the cacophony of feedback, guitar, and rumbling drums: "I feel a force I've never felt before." This before she and song explode: "I burst out, I'm transformed." Siouxsie's new independence has emboldened her sonic and lyrical experimentation. "Here Comes That Day" is a Bond-esque brass-heavy character attack that sounds like Amy Winehouse with a particularly vicious hangover; "Drone Zone" is an alliterative Brechtian jazz nightmare painting Siouxsie Sioux as Queen bee presiding over aimless, hum drum consumerism. On the glam stomper "About To Happen" she invites us along for the ride with a defiant clarion call: "It's about to happen. Can you feel it grow? Get up! Get out!"

Her heart seems ripped open on the piano-led torch song "If It Doesn't Kill You." The emotive track is sequenced at the core of the album and is simple enough that its arrangement pulls your focus directly to her reflective voice. In another world this would replace Judy Garland's "The Man Who Went Away" in A Star Is Born. On the surging, percussive "Loveless" she dwells on the futility of chasing love: "It's a sick and twisted game, to and fro and back again." It leaves her in an uncharacteristically defeatist mood: "I was fearless... I'm wearing that kooky mood. It seems to fit less." With rhythms that recall the Creatures, the band formed with her ex-partner and fellow Banshee Budgie, "Loveless" could be taken to be about their tempestuous relationship and her desire to distance herself from her history.

Siouxsie has always seemed fearless and unstoppable; while this is refreshing, it is unnerving to see her shatter the persona she has so slavishly created for herself. It is, of course, her prerogative. She has taken the music industry on her own terms; she long ago won her legacy; she no longer has anything to prove. As the album closes with "Heaven and Alchemy" she damns us for keeping her on a pedestal: "You're in love with the idea of me." She also damns herself: "In rush reality, things aren't quite what they seem to be. Cursed human vanity." It is the ultimate poisoned kiss-off but for an album so focused on exploring new horizons, it can't help but feel like a final goodbye. Whether this is a swansong or a new chapter Siouxsie is still as bewitching and bewildering as ever.