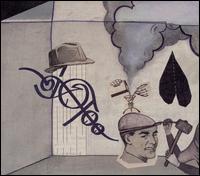 Chewing on Glass and Other Miracle Cures

Harrowing tale of Halifax hip hop Hero happenstance: Stinkin Rich and Sixtoo meet in Nova Scotia and, under the tutelage of 4-elements guru Newport, become The Sebutones (named after a dandruff shampoo because they aim to rid the world of flakes---I’m not joking). The Sebutones release a slew of mid-fi cassette-only gems forming the stuff of legend in what subsequently becomes the Canadian capital of indie hip hop. Newport’s untimely passing leaves our Heroes without mentor and they turn to each other and their rapidly-blooming hip hop community for support.

After more tapes, more shows at Khyber and Café Mocha, more Tachichi doing interpretive dance to the lyrics that every underage hip hop kid at their undersold shows knows by heart, the ‘Tones become the very last Canadians ever to make American friends, and both record for Anticon. And, most importantly, somewhere in between they sneak out one of the most underrated supergroup collaboration ever, 50/50 Where It Counts (2000), and forever ruin hip hop for me and three of my friends.

The Sebutones were Dr. Octagon before Dr. Octagon was Dr. Octagon, except they were dissecting bodies instead of just poking things into them. They were the Grade 12’s in your high school who gave you a copy of Behold a Pale Horse and made you move into your basement because of the reduced risk of nuclear radiation. They made you your first cucumber and tomato sandwich because the hormones in smoked turkey make you more susceptible to mass marketing.

Despite a greatest hits collection on Vertical Form Records, producing half the Sage Francis songs you find on Limewire, being the Jepeto behind the never-referenced "Canada Project" track that documents all involved artists at their indiest-yet-miraculously-most-intriguing, getting signed to Ninja Tune and getting Damo Suzuki to scream unintelligibly on one track on his debut Ninja Tune 12” (featured on the soon-to-be reviewed CD you thought you’d be reading about by now), helping break artists like Recyclone and Josh Martinez, producing one of the last known tracks that Cory from Trailer Park Boys rhymed on, engineering most of the Non-Prophets’ banger Hope (2003) and the Signify haunter Sleep No More (2004). . . despite it all, Sixtoo is still rarely mentioned. And, when he is, he’s usually set as a derivative of the Buck 65 machine.

Why? Where is the love? I’ll tell you: Sixtoo will take time off and bomb trains for 6 months. Then he’ll get a Gouvernement Canadien grant and make the best sample-based instrumental record you’ve never heard or heard of---Duration (2002)---And then he’ll tell everyone he’s quitting music and moving to Germany. And, worse---and here’s where we get to the stew of the matter---his vocals have in the past been awkward, or at least lacking the charisma of the First Sebutone’s (but often being more rewarding if you can keep up with him). Oh, and he has no gravel-voice gimmick. If he doesn’t like you then he’ll tell you to your face and that’s not too endearing to fans, and he will spend two months of his life helping the most unworthy underground MC just so long as there might be a glimmer of potential there, because that’s what’s good for “hip hop.”

So now, linked with Ninja Tune, touring with Signify and Sage Francis, and having employed some close friends to perform on this record (including some of the 56 dudes that make up the A Silver Mt. Zion/Godspeed You! Black Emperor monster), Sixtoo openly, through his extensive liner notes in his wonderfully-packaged new heater, says “fuck loops” and makes the music with his brain. And it sounds…like a live Sixtoo record. Wham.

That’s not a bad thing so long as you like “the heroin beats” that he and like-minded Signify turn out. This is a dark, often panicked project; but it is not without its gleaming revelations that, quite in line with their tempered frenzy, sound exceedingly shimmery in their darkness. Other Miracle Cures is a cozy abyss, and while some parts of the album lag ("Boxcutter Emporium, Pt. 2" comes to mind), they are merely brief background music, which is frequently interrupted by those aforementioned moments where you become glad you were pissed off enough to put on the scary Sixtoo record in the first place. And for a first-time “instrumentalist," as Sixtoo is, a ¾’s entertaining dark instrumental record remains an accomplishment.

Another happy complaint about Other Miracle Cures is that Sixtoo’s two vocal appearances on the album are so on-beat, so tidy, and so hungry that you wish he’d done vocals over the whole thing. Or at least the track Damo Suzuki gets all ODB on. While Sixtoo lists Suzuki as his “favourite singer," it's safe to say he probably doesn't cite "Storm Clouds and Silver Linings" amongst his favourite Suzuki performances.

So consider this review a qualified gush. The very fact that Sixtoo’s name appears on the album should warn the buyer that she’s getting dark and she’s getting something that comes from an artist who consistently channels an uneasy brand of creative schizophrenia. The downside is that this new means of song-making shows slight signs of needing a little longer in the oven. While I’m impressed with what Sixtoo has done here, I’m left more eager to hear what he’ll come up with next. Musicians, unlike comedians, are meant to leave their audiences satisfied first, wanting more second; but, then again, this album isn’t targeting our funny bone so much as our pinched nerve. Do not overlook Other Miracle Cures on the basis that it’s merely a growth spurt. It’s musical maturity growing into a more able body.