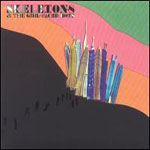 Skeletons and the Girl-Faced Boys

Skeletons and the Girl-Faced Boys have crafted a sort of ghoulish glitch-pop on their debut, which also happens to be frontman Matt Mehlan’s fourth album as Skeletons. Mehlan was operating alone in the studio or with session musicians and guests before he found his androgynous friends, the Girl-Faced Boys. I guess we should be happy for them. The album, “git," oscillates between Cansecos-y glitch-pop, Tim Burton-style theatricality and arty experimentation. The similarities to the Cansecos are actually enough to give one serious pause at certain moments, such as on the title track. The warm synth beats and backing vocals are spot on, creating synth-pop that longs for '80s acid wash, Jeri-curls and, apparently, the good ole days of 2003 when that Cansecos disc first hit. Ah, the good old days.

Thankfully, Skeletons and the gang move past this obsession on certain songs, as on the eerie mood piece “There’s A Fly in Your Soup and I Put It There.” The song starts with a sort of horror movie chanting that builds for several minutes leading to eerie singing, sounding like it could soundtrack part of Burton’s Sleepy Hollow or the Blair Witch cartoon, but nothing too sinister --- probably due to it’s close proximity to the sunny synth-pop surrounding it.

Album highlight “You’da Been Better Off” starts with a menacing key-board riff and finds Skeletons shaking off sticky comparisons. The song breaks down into a Xiu Xiu-influenced gamelan explosion before the bridge, one of the few instances where the otherwise random blips and clangs make a powerful contribution to a song. “Do You Feel Any Better” is another strong track that avoids the ten-cent beats of earlier tracks on the album and opts instead for lush, glitchy key-board washes.

But it’s not long before it’s back down synth-pop lane. “Y’all Thinks It’s Soo Easy” starts with some glitchy, tribal drumming before remembering how that one Canseco song went and really taking off into some more synth-pop. It’s not so much that’s it’s bad, or even a rip-off, because there are some elements of a band like +/- as well, but like +/-, it’s just boring synth riffing and dime a dozen harmonizing that’s been done a thousand times over. There are some strong moments here; mostly they come when the band drops the lame key-board riffs and drum machine beats of old. Music like this has to be really well done in order not to recall the dozens of other bands who attempt it, as well as to hold the listener’s attention for very lon... oh, what’s that...