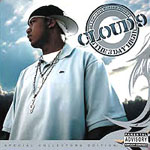 Skyzoo, an unheard and unremarkable emcee in every regard, from cadence to adlib to topic to flow, has struck gold. And, no, I don't mean another promotional spot hawking Sportscenter or Guinness, as has been, until now, his calling card. Apparently distressed by the lack of inspiration in modern hip hop, and bemoaning the inability to get heard, Skyzoo hunkered down with a handful of 9th Wonder mixtapes and recorded, in a three-day blast, the present record. This quick spat of creativity anticipates Skyzoo's forthcoming debut, an album which, the emcee continually assures the listener, will be a more deliberate, sturdy affair. One would hope so. Cloud 9 is like your friend's fart-rock band fielding Albini attention. This is like Courtney Love singing Cobain songs (... wait). This is like me freestyling over 9th wonder beats. Okay, better than that, but still.

Skyzoo can't decide a damn thing. He sounds like Jigga when he banters, structures his rhymes like Common, delivers his punchlines with the conversational tone of Lupe. The difference between him and the previous three emcees is that they all had that precious intangible "charisma," whereas Skyzoo decidedly does not. During "I'm On It," he rhymes, "Still in the streets like Jell-o lines / Phenom wit it / And your flow is like, 'nevermind' / Like, 'nevermind'", and in context the line comes across just as clearly as it does here (meaning: not), the beat even dropping out towards the end to emphasize the anti-climax. On the same track he pleads, "You know my name, right?" four times in a row. Skyzoo can't discern what exactly Cloud 9 is supposed to be: a statement of purpose? The groundbreaking ceremony of hip hop's rededication? Some tossed-off example of his and 9th Wonder's unbeatable chemistry? Regardless, a topic list as rote as his -- disses, city geography, "love" -- does little to serve the record's purpose, whatever that happens to be.

His braggadocio falls flat, the album being so unfocused, the attacks so loose; things work best when Skyzoo raps slow and unaffected, kicking lightweight stories and, more importantly, letting the dozen lush 9th Wonder beats on display here shine. And they are billowing banners, flags in the sand, airy and bantam but bottomed with a thick, spare sense of boom-bap essentialism. As a mixtape, Cloud 9 is an impressive 9th Wonder showcase, moving from mournful uptempo chipmunk soul ("Way To Go") to loverman guitar-picked coos ("Comeback") to stuttering hi-hat street menace ("Extreme Measures"), and, you know, all back over again.

It's easy and appropriate to ignore Skyzoo in the context of these beats, which are, front-to-back, a triumph of hip-hop's producer-as-songwriter argument. He wrenches, for example, a world of emotion out of the densely overlapped string swells and RZA-jacked moans of "The Bodega." The drums here, like much of the rest of the album, are an afterthought, although a breathtakingly capable one: the bass drums hit during the empty stretches of the sample, countering the momentum so that, when a snare crack starts a new measure and the sample loops open again, 9th's infinitesimal dance (giving slack and pulling sharply back) has reached Woo levels of choreographic intensity. Only "I'm On It" and "Extreme Measures" venture from this heavily sample-biased interplay, and all the better for it because Skyzoo's at his most cloying when trying to rap hard. The sanguine cool of a beat like "Mirror Mirror" removes the pressure from the emcee to match the producer in terms of illness, and, to everyone's surprise, Skyzoo manages on this beat to drop a pretty hot hook. So 9th Wonder has got some shit taste in vocals, letting Skyzoo poo all over the record and cueing up David Letterman and Denzel Washington between the tracks. Dude can make a beat, and, taken as a mildly muddled instrumental release, Cloud 9 is a much-needed nugget of solid hip-hop in this year's empty first quarter.