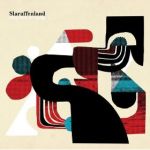 Slaraffenland: We’re on Your Side 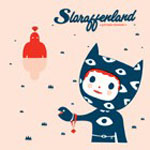 On Peter Gabriel's Security (1982), the baby-faced anal retentive finally managed to manifest mood that could be interpreted as something other than quirkiness with a human core: pure fucking dread. The literal deconstruction of his image, represented by the covers spanning his first three LPs, culminated in Security's unrecognizable visage: flat textures compressed to obscure the icon into an unnerving approximation of human features. The music was rhythmic and primal and constantly at odds with a sense of tenuous and weakening control. It was Gabriel's moment of transcendence; with that album, he became an artist who created a house of an aesthetic rather than an one who poked holes in them from a place presumably far above.

Danish band Slaraffenland aim for something similar with their remarkably atmospheric Private Cinema. This formerly instrumental band, whose ethereal and melodramatic instrumentation might place them somewhere between Sigur Rós or Do Make Say Think, have folded words into their aesthetic in a way that seems to establish the gesture independently of the message, and thus subsume the comforting sense of a conventional album's order and logic to its underlying dread. When we hear "I know that there isn't any trailer in my private cinema" before "let me out" on the beautifully trance-inducing "Polaroids," it's far from being as Corgan-esque as it sounds. The idea of being trapped alone in a perpetual screening, manipulated by what Kundera called kitsch's betrayal, as premeditated action emptily unfolds onscreen, is a hell masterfully captured by both the carefully chosen words and the song's eerily optimistic vista of sound: the warm smoke of a trumpet drifting lazily over quilted electronics and textures, perfectly integrated into the dense mix, is only one of many moments that speaks to the band's cohesive vision.

Another is the monolithic "Watch Out," which chants and barks with '80s pomp while maintaining the album's technical milieu and all-important vibe. The band knowingly ensures that the song's darker moments are dogged, not omnipresent; there's little about such seriousness that is tiring, and much about it that's just fun. The songis written in the spirit of Gabriel's eighties melodrama, but doesn't sound forced. Meanwhile, "Show Me the Way" is as conventional a song as one can expect from this band, catchy with shakers and an actual chorus that contrasts playfully with the album's temperamental isolation. The song is one of a few that allows the listener to immediately enter and enjoy Private Cinema, something that often keeps largely instrumental and atmospheric records from surpassing their context-dependent listening experience.

An ambitious and skillful album, Private Cinema reveals its artichoke heart over repeated listens. It's full of great moments: "This One Will Kill Us" rocks with straightforward melodic shifts before dissolving into a squall of saxophone protest; "You Win" is dense, rhythmic simplicity; and pretty closer "How Far Would You Go" buzzes pleasantly from a distance. It's very impressive, given this is Slaraffenland's first full-length. Where they don't have an iconic and publicly perceived image with which to play and maneuver (like Gabriel), that they've found just the right sounds to so effectively haunt the halls of their own aesthetic should put the album comfortably on a number of year end lists, and the band firmly on the radar.