1. The Untitled Ballad of You & Me
2. It Leaves Us Silent
3. Polish Love Song
4. Kitten Plays the Harmony Rocket
5. He Loved to See the World Through His Camera
6. From Where It Was
7. Horse Lullaby
8. Scary Movie 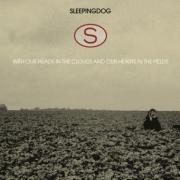 While not the “acres of ice” Voltaire described, there’s a pervasive coldness to the western Canadian plains (the only fields I’ve ever really encountered). Coldness: it’s a way of describing how even the sunniest spots are just flower-speckled band-aids over permafrost; it’s a feeling that rings true enough through works like that one decent poem Alden Nowlan penned. And coldness rings true enough in this, With Our Heads in the Clouds and Our Hearts in the Fields, the Flemish-field-inspired album from Chantal Acda and previous Stars of the Lid member Adam Bryanbaum Wilzie.

The third full-length release from Acda and Wilzie’s Sleepingdog collaboration, following up Naked in a Clean Bed (2006) and Polar Life (2008), Heads…Clouds…Hearts…Fields (obviously enough) is a gray-skied, ambient-pop concoction with title tracks that stretch horizon to horizon. Like a sleepy, Sigur Rós sort that only comes from those climates where summers are the temperate equivalent of everyone else’s late autumns, Sleepingdog’s songs are the whisper-bare sort that seem to exist solely on the back of your neck, their words just stirring minute hairs and, at their most imposing, raising the hackles for a softly haunted moment. A Sleepingdog song is the remains of what’s left when the epic Sigur Rós tide has come and gone—and gone with it, all it could carry away, leaving spare remains with all the texture of sun-bleached driftwood and dried sand.

Even the building warmth of a hazy back-vocal or drift of distortion behind the coos of female vocals don’t stave off the elegiac chills that breeze through the pall-bearing pace of the songs. Namely, I’m counting the eight-minute-and-counting opener. Acda’s words hang frozen in the air, like icicles of equal parts breath and sugarwater. There is just enough pressure in certain moments to make a bruise, maybe no larger than the pad of a thumb. Meanwhile, emitting the breathy “hoooo”s and “ooooh”s, Sleepingdog offers a between-space, a kind of resting hue that meditates a little on the moment at hand, a lot on the moments beforehand, and stares blankly at the impending weather. Lines like “We’ve lost this silence” and “It will be you” hover in no man’s land. And their questions? They don’t get answered—they just dry up and blow off somewhere like laundry you left on the line.

Generally, guitars wash away, leaving only the raw metallic brushes of strings as they brush through choruses with no electricity behind them; enter a chorus of Pacific tree frogs; enter synthesizer chords playing timekeeper to the tracks with touching tremolo and small repeating piano melodies, consisting of only a handful of notes that rock back and forth in place. At their most rousing, Sleepingdog give us tracks like “It Leaves Us Silent,” where that little turn of piano is all we need. After all and anyway, it’s the only urgency we get, expressed in little more than a shift of key and a wringing twist of a chorus.

Though the third song, “Polish Love Song,” drags, and instead of upping the ante we’re given the daunting, token instrumental intermission, “Kitten Plays the Harmony Rocket,” which deploys that striking Godspeed!-like use of strings, which rumbles with an overwhelmed bass speaker and a warming brass. It’s at this point, after the second track’s high, you begin to wonder if this is how the album will only continue, dissipating into either an ethereal poof or an ambient cliché. Only the album’s minute elements, the heroic trickle of piano in “He Love to See the World Through His Camera” for example, continually bring the album back to something firm and graspable, hand-in-hand with the way Acba’s voice picks up and mirrors the modulations of the piano.

With Our Heads is a lonely, long stretch of un-anchored time passing, the audible, honest-to-god equivalent of switching one’s mind into Airplane Mode and eyeing the smooth, barely altered upper cloudscape for the duration of a flight. As best as I understand fields—of ice, of wheat, of clouds—an homage to the field is an homage to uninhibited staring and to gazing without bounds or impending recourse. And that is the scope of this album’s successes…as well as of its downfalls. It isn’t very often I want to actually recline in a cold field (as I know them) and spend so long gazing. So when I do—in Chicago’s absence of grassy stretches—at least there’s this.