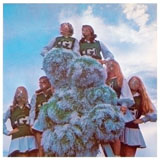 Treats is a celebration of noise. Noise has been exhaustively explored, of course, but never has it been employed this joyously. Given the apparent simplicity of this album’s formula (each song more or less a jagged arrangement of pop hooks, punk guitars, and hip-hop beats), the deafening hype surrounding its release, and the vaguely irksome newness of the whole thing (who are these guys, what’s their deal anyway, etc.), one anticipates predictable pleasures. Namely, the fleeting thrills found in something like Times New Viking’s Rip It Off (2008) or Vivian Girls’ self-titled (2008), plus a new excuse to piss off the neighbours.

The pleasures are predictable because the formula has been done to death. Swathing tracks in noise is the de facto method by which all pop songs are now presented to listeners who, I suppose, are made uncomfortable by pop unmitigated by something less immediately pleasurable. Which is to say that we all just want to listen to “Bad Romance” but maybe feel guilty or embarrassed about it, leaving shitgaze to step in and fill the void by providing some of pop’s pleasures in an ostensibly hipper package. The problem becomes that if we’re all listening to “So Bored” because it’s narrowly gratifying—if it’s fun in kind of the same way that straight-up pop music is fun—why not drop the bullshit and embrace Justin Bieber? If the abrasive, “difficult” side of shitgaze—the noise in which the pop stuff is steeped—doesn’t deepen the experience or greatly reward, what’s its function beyond superficially distinguishing it from a genre with less subcultural cache?

How Sleigh Bells manage to avoid this problem altogether, and how Treats renders every single shitgaze record totally irrelevant, is by inverting the relationship entirely: here noise does not obfuscate pop; it is subordinated to it. Every abrasive sound on Treats, from “Crown on the Ground”‘s acrid lead guitar to the sledgehammer finale of “Infinity Guitars,” is employed in aid of pleasure, not in smug defiance of it. Which is not to say that these are pop songs in the traditional sense—none of these songs, with the possible exception of Funkadelic-sampling slowjam “Rill Rill,” are sanded-down enough to really jell with mainstream predilections—but Treats shares pop’s desire to ultimately gratify and succeeds in doing so thoroughly.

And, just like pop music, with Treats it’s impossible to separate form from content. Where albums like, say, Wavvves (2009) treated noise as a blanket to cover otherwise self-contained songs, Sleigh Bells have made abrasion fundamental: the bombast of these recordings, all the deliberate bleeding and clipping, the titanic distortion all over, are so much a part of the texture of Treats that removing them from the songs would be like removing the rhythm section—the byproducts of recording, pushed to extremes, become literally instrumental. Their songs aren’t drowned out by noise so much as they’re formed by it.

There’s a moment near the end of album-highlight “A/B Machines” when a condensed, almost inhuman scream bursts through a half-second gap between guitar breakdowns. It’s a small gesture, one that seems pretty insignificant on a cursory listen, but for me this says it all: here the band has taken an intrinsically repellent sound, something universally associated with violence and pain and just general badness, and have made it enormously satisfying. And not satisfying in the sense that a lot of traditional noise music can be, nor obliquely satisfying like confrontational Dadaism. This isn’t “challenging but ultimately rewarding”; this isn’t Demon’s Souls. Sleigh Bells render noise legitimately delightful. This stuff is genuinely, earnestly satisfying, in the same way all great pop music is: these songs, simply and purely, sound fucking great.

Whether Sleigh Bells have lasting power is unclear—a sound this extreme, it’s true, risks wearing itself thin quickly—but isn’t that, too, how good pop music works? Its pleasures are immense and immediate, but they are easily expended; we use them all up and then move on to the next thing. That’s fine. Lots of great things are fleeting: meals, vacations, summer flings. These are just “treats,” after all—and for the moment I can’t think of anything better.