1. That’s Right… That Cat’s Right
2. Piece O’You
3. Tighter Than the Night
4. Leave You Wanting More
5. Let’s…
6. The Continuing Struggle Between the Dirty and the Smooth starring
Admiral Flannel and the Duke of Blag
7. Greatest Gift
8. Dominoes
9. Meanwhile in Rocksville
10. Pirate Weekend 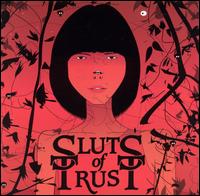 We Are All Sluts of Trust

Lordy, do I ever hate the White Stripes. I find their take on stripped down blues/garage rock to be particularly boring and their Led Zeppelin pilfering to be downright appaling; their red and white wardrobe pisses me off more than most bands' contrived costumes of cool; Jack's high-pitched whine sounds tired and uninspired to these ears; and I don't know drumming all that well, but I do know that Meg White ain't exactly what'd you call "good."

But I do have to give them credit. They rejuvenated the concept of a simple two-man guitar and drums garage rock combo, bringing with them in their sizable wake ho-hummers such as the Kills, the Raveonettes and other even less distinguished acts. But something interesting happened in the two-man garage rock band field last year: the Fiery Furnaces released a hot little number called Gallowsbird Bark that blended the tired blues riffs the Stripes were churning out with traditional folk influences and some truly inventive twists. Well, now it turns out the Fiery Furnaces have company in the Interesting Two Man Garage Rock party: The Sluts of Trust.

That's not to say that the Sluts of Trust sound anything like the Fiery Furnaces or the Stripes. But, to be honest, that's what I came to this record expecting: straight forward bluesy rock with maybe some added bells and whistles.

Well, I'm happy to admit I was wrong.

The Sluts of Trust are John McFarlane and Anthony O'Donnell from Glasgow. Like McLusky, they seem intent on exploring the noise of early grunge/punks Jesus Lizard, Nirvana and Pixies. But if McLusky took those influences and formed the tightest, crassest punk band currently residing in the world (and they are), the Sluts took said influences to an abandoned garage in Scotland, wearing make-up and two-day old underwear with various stains and began thrashing around under a disco ball and making something that might be called glam grunge. Because as much as they owe to the aforementioned grunge bands, they sound equally like a stripped glam band or the Fall or Motorhead, or even AC/DC at times. McFarlane's guitar spits out a riff, crunches it for a minute then gets bored and moves on to something different. His spastic fits of guitar attention deficit disorder are reeled in expertly by O'Donnells rock-steady beats (O'Donnell is also credited playing the Electric Beef, and if this is an actual instrument, I'm scared).

The album opens with the catchy riffs of "That's Right...that Cat's Right." Not content with sitting on one stale riff, Jack White-style, McFarlane spits out several brash riffs and sleazy lyrics in a voice that recalls early Jon Spencer and Mark E. Smith (only when he's deadpan). It leads into the intro of "Piece O'You," which leads off with an ascending guitar solo that can only be described as the type of hair metal that the Wyld Stallions would play. But fear not, the song quickly switches over to a post punk-esque riff as McFarlane barks lyrics which are alternately unintelligible or disarmingly literate and always filthy and sex obsessed. This is not boring agressive cock-rock bullshit that we've been told to listen to by Spin and other unmentionables; this is the real stuff. This is the raw, salt on open wound, tie you up in duct tape and dance in your momma's underwear rock that's been painfully missing as of late.

Back to business, as the opening riff to "Leave You Wanting More" bangs out a cathartic slap to the ears, McFarlane drawls out in a yelp: "How long is it/ Searching you inside-out/ How long is it/ Taste the chip on your shoulder/ Does it leave you wanting more?" It adds up to the album highlight and a filthy beautiful rawk song (you can watch the video on Chemikal Underground's website). McFarlane zips through at least six fantastic riffs, but always comes back to the opening banger and is joined by O'Donnell's Albini-rific bone-thwoking drumming.

After "Leave You Wanting More" comes a strong spastic set of songs. "The Continuing Struggle..." is a rapid-fire piece of sneer-magic punctuated with tasty disonant guitar explosions interupting pulsing riffs. McFarlane's guitar work is quite inspiring, and what he does with one guitar should be illegal. The song structure is reminiscent of Pixies classics with their quiet-loud/verse-chorus formula that became the DNA for grunge and most post-punk. "Greatest Gift," another high-point, opens with what almost sounds like an Interpol riff but quickly changes in with a mad coke rush of near-acidic energy as McFarlane growls: "Fuck me baby/ Fuck me with your fist/ Take me with my eager lips.../ This is the greatest gift." The song then explodes into a series of howls and near Hair Metal riffs.

McFarlane is at turns raucous and disarming. As a frontman he reminds one of a cross between the Lizard's David Yow, and as I said earlier, Jon Spencer and Mark E. Smith. Just imagine Mark E. dancing around with lipstick smeared all over his lips, wearing a cabaret costume, his nipples pierced, his head shorn and being more concerned with his ex-girlfriend (or boyfriend) than the government and you have a glimpse of the kind of front man McFarlane makes (and I mean that in a good way... I think). In short, McFarlane is the kind of intriguing front man that will keep you coming back to the Sluts.

The Sluts of Trust summon ready-made references to the super powers of grunge past, but they certainly add their own unique take on things and with McLusky are one of the few bands actually furthering the movement that seemed to end with the Pixies, the J.L. and Nirvana. They make songs with jagged, sharp, multiple riffs, seering wit, oozing sexuality, skull rattling drums and, most importantly, personality. With We Are All Sluts of Trust, they've created a truly enjoyable album good for carousing and drinking and fucking and dancing all night. They are a revelation in terms of being a rock band that actually knows how to have fun and can still maintain an edge.