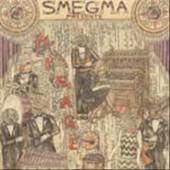 Titters at esoteric dirty word usage aside, imagine my surprise when I attempted to load the Smegma wiki to fact check a couple of details and found myself face to face with a graphic picture of a smegma-pocked penis glaring at me on the non-band actual smegma page. Anecdotal though this story is, and junior highish besides, it kind of summed up better than any intellectual discussion could why Smegma is the perfect name for this band, and has been since Glamour Girl 1941 dropped in 1979: Smegma’s music has always emulated those moments we have in everyday life that run the “what? Huh? Oh. Wait: ew” gamut in a tightly packed thought.

I say this because it’s easy to casually drop even Smegma’s best music, like 1987’s Nattering Naybobs of Negativity, into a sort of uneasy space between free improv and avant-garde musique concrète, but that attempt at categorization ignores how planned out this band sounds—an idea for which the excellent Mirage provides ample evidence. They’re pushing your buttons in an operatic sense, moment to moment, rather than calculatedly running out the string of a good idea like most free improv artists or steadily upping the tension like, say, Nurse With Wound. Both approaches which I love, of course, but Smegma forged a different route. Like, y’know: somebody somewhere was like “here’s a good reason to post this picture of a smegma-ridden dick on the internet.” And they really meant it. Smegma sat down in the mid-seventies and decided to invent one branch of noise music as we understand it in the modern sense, unearther from krautrock or psychedelic improv or free jazz or whatever else, where the moments themselves were shocking portraits that mattered. Mirage turns out to be a mature take on Smegma’s brand of punk, and, even better, I only use “mature” in the sense that the punchlines are punchier and the anger is sharper: this is a honed record, I mean, and glorious for it.

The most exciting thing about Mirage is how wonderfully it recalls that the brilliance of this band most readily manifests itself in a wealth of claustrophobic melodies that kind of grind against one another. That slow entry of the plucked string riff during the cacophony of “Oh Yeh” is a smart reminder of the tonal approach Smegma takes towards composition. Like, the actual melodic figure is kind of saccharine bullshit, but drowned in a well of excessive noise it becomes this tense, repeating refrain that sounds like it’s about to collapse at any moment. Or maybe “fray” or “splinter” is the better way to say it; maybe it just sounds like it’s going to become it’s own black hole? Meanwhile, live instrumentation and noise constantly change our sense of the key surrounding the steady figure, while Ace Farron Ford sounds like he’s swallowing a saxophone in the margins. The even more raucous “World of My Own” compacts about six different anthem-ready chord progressions back to back and runs them through a minefield of contemporary samples, guitar figures, abstract noise, oscillation, jazz riffs, and pounding percussion. It’s free improv psychobilly, or something, but pretty just the same.

If “World of My Own” and “Oh Yeh” represent the full scope of the Smegma, the other three tracks each show a more specific side of the band. The captivating title track is more in line with the band’s musique concrète influences. Alternatively, the loosest track on the album is “That Part of Wales,” where it seems the limited attempts at structure that guide the earlier tracks on the album fall away to allow the free improv abilities of the band room to bloom. Dennis Duck’s brilliant percussion is especially wonderful here, tying together the free-floating and entangled lines of the other players into a coherent thread. Finally, those familiar with Smegma will know from a quick look at track lengths that “F85 Turbo Rocket” will be the example of the third extreme: a slack-jawed punk/rockabilly whatever with reverbed guitars and incomprehensible vocals. Like every other Smegma song that treads this line, the song is more important for the way it fits into the heavy noise that makes up the rest of the album than it is on its own merits, though: catchy, at least insofar as “catchy” is a useful descriptive term for Smegma’s sound.

The album ends with a 1974 jam from the band’s archives. It falls more in line with “World of My Own” and “Oh Yeh,” and provides an interesting point of comparison for how the band’s sound has developed. Most interesting, perhaps, is the fact that more than thirty years hasn’t really tempered the sound of the band at all; the difference is, as I suggested above, a confidence that moves alongside the frenetic playing of the musicians involved with this project. So while I’ll admit that when I heard there was a new Smegma album I was initially kind of “what? Huh? Oh. Wait: ew” it turns out I’m excitedly surprised. Mirage is something cacophonous and beautiful in its own right, and not just an excuse to return to a once-beloved band’s back catalog. Smegma really meant this.