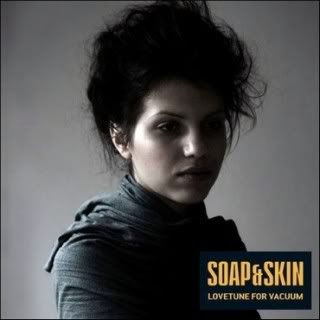 Between this, Bat for Lashes’ Two Suns, and Antony & the Johnson’s The Crying Light, an alternative history of indie rock circa 2009 might be written, one not dominated completely by hazy, narcotized lo-fi. All three share a belief in experimentation-as-heightened-drama, manifesting itself through numerous forms of instrumentation and production techniques but always, ultimately, in vivid cinemascope. Which isn’t even just about masculinity or femininity—though there’s a whole essay here somewhere about how irony, detachment, and layers of under-produced fuzz all tend to displace the anxiety of damaged male pride—but it is about sexuality in general. It’s also about youth: the youth of bands like Wavves (boredom, malaise, frustration) and the youth of 18-year-old Austrian Anja Plaschg, which provides a temporary, borderline-paranoid escape from that frustration.

Granted, there’s awkwardness here: the seemingly unintentional sensuality in her use of the word “butt” on “Spiracles,” the sudden scream which gets sucked back into silence just as quickly (the same effect that makes “vacuum” such an apt description, that made it absolutely necessary for Plaschg to pose on a neutral grey background for the cover, all Tess of the D’Ubervilles and The Cabinet of Dr. Caligari), and, alright, pretty much everything about that song, are among the most squirm-inducing things you’ll hear this year. But this is awkwardness with the ultimate aim of transcendence. On Soap & Skin’s website, Plaschg stares out behind smeared eye-shadow, lingering after-images occasionally blurring and dimming her face. It’s confrontational, but also kind of oblivious, like she’s looking right through you. Who are you writing love songs to in a vacuum, anyway?

Lovetune for Vacuum is getting noticed for its eclecticism, and I get that, although what seems more surprising is the way in which all these styles—Tori Amos piano balladry, jerky IDM flourishes, Scandinavian experimental folk, Nico everything—come off like various shades of grey. Not that it all sounds the same, but more that all the experimentation mostly serves to accentuate Plashg’s personality. Occasionally the arrangements fill out—the cocoon warmth of “Cry Wolf,” wherein she correctly mines the element that makes the Fonal and Locust labels so consistently rewarding—but mostly this is an album of broad strokes. Other standouts are the bleak, gothic monoliths like “Thanatos,” which stews around in the lower keys of the piano to brilliant effect, and “Marche Funebre,” all glitch, orchestral doom, a cinematic cut-and-paste by way of DJ Shadow reduced to a death march. What’s really impressive about these two is that, even at such a tender age, she seems on her way to conquering the two quite separate worlds of classical arrangement (she’s a hell of a pianist, for what it’s worth) and electronic production.

If there is a good contemporary comparison on a more conceptual level, it’s Xiu Xiu. Like Jamie Stewart, Plaschg’s every gesture seems to stem from a desire to express herself in the most unfiltered way possible. And for both artists, the desire to communicate with an audience becomes secondary, as if at times they seem to be involved in a project of personal therapy, where process is more important than the end-result. Then again, I’m somewhat convinced there may even be some development to come in her voice: she still sounds fairly raw for such eloquent music, and on attempts at quieter ballads like “Extinguish Me” and “Brother of Sleep,” she has to settle for hovering low in the mix. The tactic might work in other scenarios, but you can tell these songs are so close to her that it just seems natural that her voice would take command of them instead of getting relegated to Plashg-light fringes.