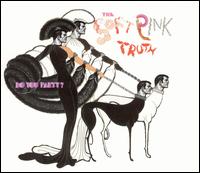 Of course you party. You might not at first. But two listens through, and you can't stop thinking, "Do You Party? Do you party? Party, partay, someone show me some fine women and a disco ball neo-glitcho-funko fuck it all and get on the soft pink dance floor." I don't even know if that's sexual. Probably is.

This cd is the cd you would play at a cross dressing party where all the guys and girls are swingers looking to party like animals and fuck around everywhere in a pink plush house with 20 pink bedrooms that all have satin sheets.

"Please welcome" says the record, "Soft...Pink...Truth." Sampled vocals, funky synths and squelching, sex effects that don't sound like sex but ooze sex attitude and texture. The variation is wonderful, like a rearranging and then reframing of sex positions in one utterly raucous and blissed out love-fest, a switch of pace and now it's slow and low and then it's everything mixed together and it's furious, so it seems that I haven't really evaluated this record on musical merits as much as make sexual analogies and metaphors. Then again, that is the sheen of this album, song titles like, "Everybody's Soft" with its obvious but nonetheless witty pun, "Soft On Crime," "Makeup" with its ridiculous deadpan chick samples saying, "I want to make it good for you," cripes, any number of nuances that make this cd about sex and well crafted disco and (in an ideal world) how they should mix in a perfect heady mix of tones and breaths that just make you want to grind and then really grind. Drew Daniels is the man, the man drinking the martini on the inside cover and wearing god-knows-what, but at the party you'll be throwing to this cd you'll probably look not too different.

"Girls, GIRLS, gIRls..." - ahem, excuse me, that was "Gender Studies," which ends with a sample singing "I wish I was the lady." Yeah, it's a guy's voice. It's all about the switcharoo and the guilty pleasure. Speaking of which, you should pick this the fuck up. And move that ass. You're getting fat if you're not dancing.

Ok. But now I've got a hold of myself and now only my shoulders and legs are rocking, but not my whole body. I would rather be, though.

SO first and foremost the point is that this album is a fucking great time, and that was a pun and yes I meant it because well you could be doing anything to this CD. You could even be writing a review of it. Mine is very favorable because Drew Daniel understands that he should either keep his ideas short or constantly varied, one-upped, dropped out, put back in. Vocal samples start out on every other beat, but then pop up mid-beat and then cut out and the pile on, as a sub-bass beat winds its sinister little belly through your head.

Daniel uses short samples, sometimes, oftentimes, many in succession to give a tiny tiny bit of continuity to intentionally sparked and wacked out songs. Again, not too much unlike the stop and start of sex.

Mostly sub-bass beats and always the sexy female voice sample, with variation out the wazoo and cleverness just spilling from that sexy martini glass. The reason it's so much better than techno is that it has attitude and isn't made up of similar, repeated, piled up loops. One thing that highlights Daniels' originality is precisely how little he layers like Oakenfold or other club-spinners; he's far more concerned with making a collage of funk and disco rather than an overblown climax. This is the main strength of the record. When you think he's going to lay it all on thick, he holds back and puts only a couple elements together that sound awesome. He's damn original, is what he is.

And in the end, that's what you want, just like you'd want it in sex. You could have the easy run-through; start, intensify, climax, cigarette, thanks honey that was great, goodnight. Or you could have the Soft Pink Truth; start, intensify, subside, holy fuck I've never done it this way before, slow down, freak out, break the rhythm, work back into it and then finally holy God can you go again in 2 minutes? Rinse and repeat.