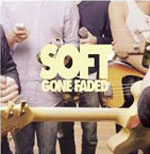 Yours truly had the worst introduction to Soft the band could possibly imagine. On a night in January of 2005, when I'm guessing I was extremely bored, I took in an early Voxtrot gig at New York City's (thankfully) defunct Rothko. Part of this was due in no small part to the promise of a "very special guest" after Voxtrot's set. Internet rumors of David Byrne loomed large, so imagine the audience's collective disappointment at being forced to sit through fifty minutes of Smiths pastiche only to be rewarded with very special guest Soft: a then no-name five-piece who proceeded to greet the crowd with a canned Happy Mondays riff. Were they that desperate for exposure? I signed their mailing list out of pity.

Soft is a Brooklyn-based band that's been in existence since 2003. It's nearly 2008, and Gone Faded is their recently released debut album. Granted, it was preceded by at least two EPs, myriad free internet downloads, and even a full length LP in Japan (seriously). But every one of Soft's releases contains significant overlap, a testament to -- and the band readily admits as much -- relentless tinkering with the same batch of 13 or so songs. Hardcore Soft aficionados could theoretically have four separate versions of "You Make We Wanna Die" or "Droppin'" on their iPods by now, with negligible sonic differences.

And to what end does Soft devote this pursuit of perfecton? Early 90s Madchester Britpop. That's it, and that's all. Careful CMG readers may note that this writer has no problem with that genre, and enjoys himself some Happy Mondays, Stone Roses, and Charlatans; I snap my fingers to "The Only One I Know" and readily jog to "Step On" at the gym. Soft are probably a little more extreme in this regard. Rumors that they spent two of the five years leading up to Gone Faded attempting to exhume Martin Hannett's corpse are unfounded, and yet would be unsurprising. Virtually every note on Gone Faded can be directly traced to the dead legend's production on Happy Mondays' Bummed (1989) and the ensuing Hallelujah EP (1990), and Soft would be hard pressed to disagree methinks. Almost equally obvious touchstones include the Charlatans self-titled album (1995), where ramped up were Tim Burgess's vocals and Rolling Stones riffs abounded in an attempt to sell more records, and (sigh) Loveless (1991). The Charlies comparison is especially apt on account of Soft vocalist Johnny Reineck, who unleashes a nasally, boyish tenor extremely similar to that of Burgess.

Soft is hardly the first indie rock band to look towards what was indeed a particularly fertile time period for inspiration, and they deserve much credit for being far less annoying than the Klaxons. But unlike the similar (if vastly superior) Working For a Nuclear Free City, Soft don't use Madchester as a framework so much as an attempt to recreate it, slaves to the playbook. As such, you'd be forgiven for thinking that the percentage score is a misprint. Because it's not. There's far worse qualities a band can possess aside from fanboy devotion, and derivative or not, it can't be denied that many tracks off Gone Faded totally bang. In addition to ecstasy production values, Soft was also wise to include the crack rhythm math and starry-eyed climaxes that the Hacienda kids gobbled up, and can I really begrudge a band for owning many of the same albums that I do?

It's obvious that portions of Gone Faded suffer from Soft's maniacal devotion to their tiny batch of songs; it would've been helpful if an outsider had convinced them that every last tweak on the planet won't obscure the fact that "You Make Me Wanna Die" simply sucks, as does nearly every song where guitarist Sam Wheeler unwisely elects to emulate Noel Gallagher as opposed to John Squire ("Ring On" and "Hot Club" being particularly muddy). The baggy folk wanna groove y'all, and loose-fitted rave-ups like "Dumb Blood" and "Great Spirit" fortunately allow them to do exactly that. The latter would've been a legitimate smash had it been released in 1992, filtering the drumming and shoegaze guitar of MBV's "Soon" through the fatback funk of U2's "Mysterious Ways" to create something incredibly infectious. "Dumb Blood" is appropriately the first single, featuring both the album's finest groove and catchiest chorus. And when Soft approaches their ballad songs with a purpose aside from an excuse to embrace Oasis, something works: "Hundred Days" in particular surges with an optimistic bounce akin to a quality Charlatans ballad like "Just Lookin'" or "Just When You're Thinking Things Over," acting an obvious third or fourth single from back when such distinctions actually mattered.

Gone Faded is certainly a fun listen, and I'm hardly one to trash a band whose reverence for early '90s Britpop is so overt, right down to their affinity for drafting B-sides that outshine the material on their parent albums ("Blackout", formerly "Lucky Jam" and only available on iTunes). But something about spending nearly five years in the name of madly refining a limited batch of Madchester tributes still seems more than a little bizarre; I mean c'mon, even Shaun 'friggin Ryder somehow cribbed together the first three Happy Mondays records in half the time. Right now, Soft amount to little more than copyists, albeit skilled ones. It pains me to be so elitist, but: a swiftly released follow-up LP containing all new material would go a long way towards establishing them as a legitimate band.