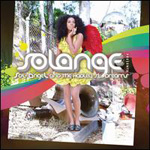 Sol-Angel and the Hadley St. Dreams

Solange Knowles sounds a little hurt. As an opening track/preamble/disclaimer “God Given Name” is kind of charming despite (or perhaps due to) its heavy self-consciousness, Sol-Angel taking time to describe the pros and cons of her new direction (even running into a passage where she says “sorry” on repeat) after the generic Solo Star (2003) and then launching into how that direction is increasingly different from the one taken by her sis. Beyonce chose diamonds and Jay-Z; Solange chose a big perm and Mark Ronson. In her desperate effort to find a separate artist identity Solange has gone, if I can even say this, balls out. Sol-Angel and the Hadley St. Dreams is as silly, day-glo, eccentric, and all over the place as its title. And beyond Ronson Solange turns to unabashed retro fetishism with a checklist of producers including Jack Splash and Cee-Lo Green to achieve that goal, bell-bottoms rustling as she flips through the soul and pop records she’d like to rip off, be it Marvin Gaye on her ode to him or the Supremes on first single “I Decided.”

There’s the most anachronistic producer choice on the record, but it pays off in dividends: the Neptunes. “I Decided” is in a whole other galaxy from Hell Hath No Fury (2006), quiet piano chords lounging around the insistent 1-2 of the snare-clap and tambourine-hat combo. The only resemblance this bears to P-Willy’s usual clangers (besides maybe the squeaky synth drips on the hook) is philosophical: maximized minimalism. The embellishments aren’t very noticeable, an orchestral swell feeling like it’s coming from a pit a mile behind the drum kit. The effect is mesmerizing: a harmonious disparity between the music’s steady beat and its treble swaddling that creates a series of expectant spaces which Solange obligingly fills with indelible melodies and harmonies. The rest of the record expends a lot of effort trying to live up to this effortless greatness (no better example than the ludicrously overdone “I Decided, Part 2”) and Solange at times sounds like she’s straining with her limited pipes for something just out of her reach, some golden pop moment of the past that she wants to own a part of. “Dancing in the Dark,” a recycling of genre tropes from its horns to its “I should be dancing” refrain, highlights where Solange’s charisma teeters over into obnoxiousness, the middle stuffed with obscene vocal runs.

Sol-Angel has one other big miracle in store, though: “Would’ve Been the One” is at least as good as “I Decided.” The music lacks that hypnotic simplicity but Solange is even better. She maintains a personal perspective while omnisciently parsing a tangle of connected relationships with a kind of lyrical numerology, a gimmick that plays off much more subtly and successfully than the acronymically ridiculous “T.O.N.Y.” And Solange reaches a section where she’s almost shouting in her higher register, eluding her vocal constraints in favor of a powerfully direct approach. The music pushes the acceleration at the close of its measure and so brings us with a small thrill to each closing line and each appearance of the title, leaving Solange a bit surprised by her own song’s hurtling awesomeness as she throws in a “whoa” on the tail of the final chorus.

“Would’ve Been the One” and “I Decided” sandwich super goofy but amicable second single “Sandcastle Disco,” comprising a three-song streak that makes the album feel very front-loaded since the second half doesn’t have anything comparable. Well, it also feels very front-loaded because the second half descends from the aimless “Valentine’s Day” to the definitely not bluesy “6 O’Clock Blues” (let’s call that “the Ronson Effect”) eventually to “I Told You So,” which could’ve been a much needed pinch of sobriety on such a giddy record but squanders its chance by putting an awkward lift on both the song’s chord progression and its mood. After that the record does get serious, but unfortunately by “serious” I mean long, self-indulgent ballads “Cosmic Journey” and “This Bird,” the former of which was likely inspired by a night of watching Aronofsky’s The Fountain and one too many glasses of bubbly—with Bilal. Probably needless to say, it sucks. “This Bird” samples Boards of Canada but I’m not gonna give it any extra credit for that; it feels interminable.

Apparently Lil Wayne was supposed to appear on “ChampagneChroniknightCap.” That would’ve helped. They could’ve thrown Ghostface on “T.O.N.Y.” while they were at it. But it probably wouldn’t have helped in the long run, as it’s very clear where Solange should move next from this exploratory venture to carve out the credible niche that she wants so badly—and where she’s going, rappers can’t follow. The sequencing of this album suggests that Solange and I agree where the goods are at. I’m hopeful. A record filled with songs like “I Decided” and “Would’ve Been the One” would be as timeless as the classics Solange is trying to invoke.