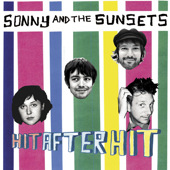 Sonny and the Sunsets

Like many a good songwriter, Sonny Smith makes what he does well seem effortless. His songs sport simple arrangements unadorned by much of anything resembling overt studio trickery and, when at their best, communicate a handful of knockout melodies that help to propel his willfully naive, Jonathan Richman-indebted persona. As part of the burgeoning San Francisco garage scene, he eschews the approaches his Sunsets (Kelley Stoltz, Tahlia Harbour, Ryan Browne, and Zack Ehrlich, in addition to bit parts from members of Thee Oh Sees, the Fresh &amps Onlys, and several other bands) gravitate toward in their main projects, which tend to be louder, more psychedelic, and more abrasive than anything on either Hit After Hit or its predecessor, Tomorrow is Alright (2010), records which often seem clean and straightforward in comparison. With Hit After Hit Smith streamlines his approach even further, distilling his pop songwriting down to low-key riffs hiding killer melodic payoffs, often made apparent through the presence of a voice other than his own. In short, it’s a breezy, utterly approachable rock and roll record.

The best songs here make their quality clear almost immediately. It’s in the jumps from bass to guitar and back between the verses, as well as Smith’s gentle but utterly confident delivery, on “Girls Beware”; in Stoltz’s ability to get away with playing nothing but rim hits and hand drums for the first half of “She Plays YoYo With My Mind,” one of those songs that can sustain a few basic ideas for upwards of four minutes; in the faux-naiveté of “I Wanna Do It,” where no matter how morbid Smith gets it’s impossible to read anything but straight-up lust out of his relentlessly sunny chorus; and it’s in the maudlin, perhaps even stalkerish “Pretend You Love Me,” where Smith pines from a distance, struggles with his affection, and just might lose all grasp on reality while his ensemble remains completely grounded before making room, in the space of under three minutes, for both guitar and drum solos.

More often than not, Harbour’s mere vocal presence serves as each song’s key decoration, something for anyone bored by Smith’s voice or lyrics to latch onto. Her harmonies fill out potential negative space wonderfully, adding unclean, sometimes reverb-soaked textures to the band’s fairly straightforward guitar-driven songs. On every song I’ve mentioned so far, her singing proves as crucial as any lead or hook in giving it cohesion, which shows how vital the full-band approach is to these songs’ success. However, the ensemble alone isn’t totally satisfying, either; “The Bad Energy From LA is Killing Me,” the album’s only instrumental, seems frivolous.

Though it’s clear Sonny Smith thinks in hits (or at least in singles—the insanely ambitious 100 Records project, in which he released 100 seven-inch records as 100 different bands, proves this better than anything else possibly could), Hit After Hit doesn’t achieve its titular goal completely and totally. It does come fairly close, though, and makes strong cases for the tunefulness of San Francisco’s new garage music, Smith as a songwriter, and the appeal of something done straightforward if also done well.