Other Records by Sons and Daughters 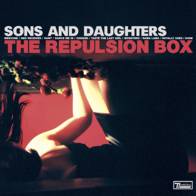 Sons and Daughters: The Repulsion Box 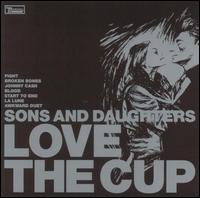 Two-part harmonies are fun. Perhaps not quite as much fun as hand claps (the absolute heroin of pop music), but certainly better than, say, human contact (massively overrated). Two-part harmonies with a Scottish accent have the added advantage of being seductively bleak. This means, in theory, that Sons and Daughters ought to be huge. Give them time, they may well get there (they do have Franz Ferdinand on their side, and that never hurts).

For their first proper release the Glasgow-based quartet, which includes two former Arab Strap session musicians, has released Love the Cup, a seven-song, 25-minute EP of some extremely promising indie-rock. Cup is loosely modeled on Johnny Cash (both the man and his subject material), and the juxtaposition of Scottish folk music and defiantly American blues and rock, all wrapped in a rather desolate delivery, makes for a great listen. Though a few tracks go a bit too far toward chanting, the EP as a whole is an engaging, propulsive, extremely dark gem.

The call and response vocals of “Fight” lay out the format of vocal interaction and sturdy drum lines that define the EP. The guitar and bass lines remain simple and driving throughout, so most of the weight falls on singers Adele Bethel and Scott Paterson. The quiet intro to “Broken Bones” plays nicely off the guitar stabs of the chorus, while the fantastic “Johnny Cash” is on full blast from its start, complete with dingy guitars and whoops and hollers from the rest of the band.

The second half of the EP feels faintly gregorian. “Blood” would have been just as good with just one singer, and “Start to End” does just fall into chanting. A more interesting bass track or an earlier break in the drum line of “La Lune” would have improved the song, but the vocal breakdown makes for an interesting chorus. The EP finishes off with the excellent “Awkward Duet” rising over plucked guitars that match the vocal interplay in the song. Bethel’s wail is fantastic, and her quiet refrain of, “Consequences, lines of contracts / Sentencing the one word unsung, ” shows what may be a significant songwriting talent.

Maybe indie-rock is ready for a new sub-genre. I can see chant-rock as being sort of a fun offshoot of post-rock, and while Sons and Daughters don’t get everything right here (and ultimately 25 minutes isn’t much to judge a band on) they certainly seem to be off to a good start. While they won’t be challenging any other Scots that immediately come to mind (Franz Ferdinand with their dancing, Belle & Sebastian with their weeping and dancing, Idlewild with their emo-rock, or Arab Strap with their sexual frustrations), they could go far if they’re able to refine the sound that they present on the EP.