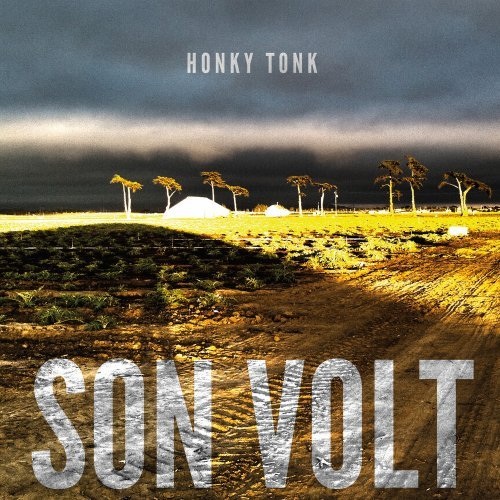 On their seventh record, now nearly twenty years into their career, it’s clear Son Volt has nothing left to prove. Their records have run the gamut from a near mainstream success (1995’s Trace) to a burn out (1998’s Wide Swing Tremolo) to a comeback (2005’s Okemah and the Melody of Riot) and Jay Farrar and co. are still standing, making records now for themselves and their loyal fans. It’s presumably freeing for a band to reach this level of security and comfort, though it’s not a position that precipitates any kind of bold moves. Son Volt isn’t coasting, necessarily, but perhaps gone missing is a certain tension or sense of urgency. Honky Tonk, their newest, vintage country-inspired release, is an example: it’s a showcase for a bunch of excellent musicians and a sharp songwriter like Farrar. But though Honky Tonk is strong in its elegant, shimmering simplicity, it can be frustrating in its restraint, fuzzy around the edges and too quickly forgotten.

On Honky Tonk the band is humble and focused, the production open and airy, the songs bathed in that dull yearning Farrar is so good at mustering. The result is light as a feather, with laid back songs that would be perfect played live during some lazy afternoon outdoor festival, sprawled on the grass and drinking a cold beer. Over the course of their career, Son Volt has excelled the most in the country and roots realm; in fact, Son Volt’s only career pitfalls have come as a result of trying to be a fully plugged-in rock band. This album, then, smartly delves further into country music than is typical even for this alt-country band, inspired by the Bakersfield country of the ’50s and ’60s. But these songs are still unmistakably Son Volt, still touched by Jay Farrar’s melancholy Midwestern blues.

By far the strongest aspect of Honky Tonk is the band’s attention to detail. What saves the record from dullness is its strategic but not overwhelming flourishes of fiddle, pedal steel, accordion, harmonica, and mandolin throughout. A great example is “Livin’ On,” a somber tune made interesting and even dramatic through subtle layers of sound: as Farrar sings, a harmonica wanes in the distance like a train whistle, getting louder and then backing off, while the pedal steel whines with increasing intensity. Similarly, “Down the Highway,” probably the album’s most memorable song, features well-timed sunbursts of fiddle, an instrument that the band molds nicely to different moods on the record. Here it mingles perfectly with a gently plucked guitar, hymn-like and reverent, evoking just a touch of that old Louvin Bros.-style gospel.

Farrar’s voice, as ever, is another strength: he’s well aware of his limited range, but exercises impressive control, imbuing it with a nice balance of warmth, cynicism, and grit. And despite the old-timey leanings of Honky Tonk, Farrar doesn’t attempt to approximate the bounce of a Buck Owens vocal; he grounds these songs firmly in the present. The disappointing factor here is the lyrics. Farrar has proven in the past that he’s got a way with a phrase (“Whiskey bottle over Jesus / Not forever, just for now”), but his standard lowlife fairytales are missing here. The songs on Honky Tonk are somewhat vague and surprisingly optimistic instead, as on opener “Hearts and Minds” (“Though our hearts and minds don’t waver / Waiting for love / that’s out of danger”) and “Down the Highway” (“There’s a world of wisdom / Inside a fiddle tune / Throw this love down the highway / See where it takes you”). Though the tried-and-true Son Volt aesthetic still dominates here, it’s these occasionally facile forays into old-time sentiment (see also “Seawall”) that trip up what is, for the most part, a graceful record.

Though it stumbles a bit throughout, Honky Tonk ends on a high note with “Shine On,” a trembling pedal steel number that showcases the band’s talent for restraint and dynamics. And that’s pretty much Honky Tonk as a whole: it’s a delicate and lovely album with a swooning, consistent mood—in other words another quietly enjoyable Son Volt album. But it’s also maybe a bit too quiet, unassuming, and eventually unmemorable beyond its final notes.